Zero Suit Samus is a veteran starter character in Super Smash Flash 2. She was first announced during the "Super Smash Flash 2 Demo v0.9b Trailer", and appeared at the McLeodGaming's booth at APEX 2014 alongside Marth and Chibi-Robo. Her sprite design is based on her appearance in Metroid: Zero Mission; her moveset and voice clips are taken directly from Super Smash Bros. Brawl.

Zero Suit Samus is currently ranked 8th in the A+ tier on the current tier list. Zero Suit has disjointed range in her attacks, amazing mobility, good zoning ability and finishers in her forward smash, up aerial, back aerial. Samus has a good long distance recovery due to her high air speed, good vertical mobility, Flip Jump gains quite a bit of horizontal height and can bounce off enemies in its initial windup, intangible or not, has a large ledge sweet spot thanks to her aerials. Her disjointed attacks allow for her to wall out her enemies and keep them at bay.

However, Zero Suit has below average weight which allows her to be KO'd horizontally earlier. She has problems KO'ing due to her finishers, outside of back aerial, need to being close to the blast line to kill or her opponents need to be at very high percentages. Her recovery, although covers a lot of distance, can be easily ledge hogged if timed right. Her height and being an average faller makes her easy to hit.

Zero Suit Samus is a fast, strong fighter. Zero Suit has great mobility overall, with having amazing ground mobility, great air speed and amazing vertical mobility, which aids her air game. She has disjointed reach in some of her attacks, that is very useful in walling out her opponents. She has finishers in her forward smash, back aerial, neutral aerial(when close to the horizontal blast zone) and up aerial(when close to the upper blast zone).

Zero Suit Samus has multiple options to recover, possessing great air speed and being able to use Flip Jump to bounce off opponents if the move connects. She has among the largest ledge sweet spots in the game due to her specials, Plasma Whip and Plasma Wire, focusing on grabbing the ledge.

She has strong tools for starting combos in her down smash and Paralyzer which stuns her opponents long enough to get follow ups.

Zero Suit Samus has a very useful throw game. Up throw is an incredible combo starter, being able to combo into neutral aerial, forward aerial, and back aerial/up aerial for kill confirms.

Zero Suit Samus has kill moves in her forward smash, forward aerial, up aerial, back aerial, Plasma Whip, and at higher percents, side tilt, dash attack, up smash, and back throw can kill.

Another problem she has is in her recovery, due to it relying on the ledge means she can be edge hogged if the opponent knows how long to stay on the ledge. However, she is still one of the hardest characters in the game to edge guard. Flip Jump, if an input is executed too fast, or if the input is held, will result in Samus sticking her foot out and not being to use any other move until the attack is finished which can leave her too far away to recover.

She also tools to deal with projectiles. Her disjointed range is only available in certain attacks, which it also does not give off long range with the exception of a few attacks, such as forward smash. 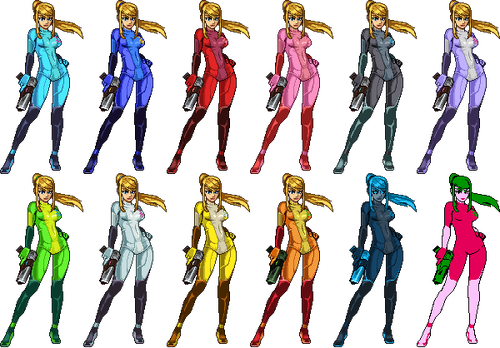 Zero Suit Samus and Kirby about to uses Paralyzer on Crateria.

Sora using his back throw on Zero Suit Samus.

Zero Suit Samus getting hit by Goku's down aerial on Tower of Salvation.

Zero Suit Samus dashing toward Chibi-Robo, who is using Chibi-Blaster.

Zero Suit Samus about to use Paralyzer on Ichigo while he is holding the Ray Gun.