Yoshi's Island is a starter stage in Super Smash Flash 2. In the development stages of the game, there were several stage concepts with the same name, all centered around the Yoshi universe. However, SSF2's version is a custom-built version of Yoshi's Island, meaning that this specific version has never been used in any official Super Smash Bros. games.

Yoshi's Island is a medium-sized stage conformed by a big hard platform in the middle with a rotating wheel with four pink platforms in the middle and two smaller hard platforms on both sides which are slanted slightly towards the center of the stage; above those, in turn, are two pass-through platforms. The portion of the left is a grassy cave-like area which connects to the autumnal, rocky grassland area in the middle with a sloped wooden bridge while the plain-like area with visible plateaus in the background found in the right connects through a dilapidated staircase. Goonies also appear on this stage, but as platforms that will fall if stood on for too long. Lastly, translucent Winged Clouds may appear on both sides of the stage, and directly attacking them will cause the clouds to release a random item.

Originally, Yoshi's Island was seen as a tournament legal counter-pick stage due to its large size and multiple platforms. However, as the metagame progressed, it became all too clear that the stage was too large and promoted camping. The stage also has slopes, and a "sharkable" main platform. Due to these factors, it was all too common for the match to end by time.

The motif of the stage is based on Super Mario World 2: Yoshi's Island, a game known for its crayon drawn-like art style. While named Yoshi's Island, the stage is evidently not taking place "on" it as the island itself can be easily spotted in the background. Several levels in Yoshi's Island contain the characteristic rotating wheel seen in this stage, with various usually found in sequence and placed right above bottomless pits, thus requiring Yoshi to make meticulous jumps in order to land on the rotating platform without falling and losing a life.

Goonies are regular bird enemies found throughout the game, particularly on mountain areas, and usually come in great numbers. If Yoshi hits one with an egg, it loses its wings and becomes flightless, the same happens is Yoshi swallows one with his tongue. Goonies are good to catch a ride, though they sometime fly in the opposite direction Yoshi is actually heading. Winged Clouds are found in almost every level of the game. To activate them, Yoshi requires to hit them with something, either an egg or a spat enemy, this may reveal their content (like flowers, stars or other items) or may trigger something that somehow affects the level, allowing Yoshi to reach new areas. The background possesses several eye candies aside the aforementioned island, these include a red arrow sign, a green Warp Pipe with a red arrow, an Egg Block dispenser and a Chomp Rock.

Four Yoshies on the wheel.

Yoshi's Island, as it appeared in the first Smash Flash DOJO!!! in early 2008.

Yoshi's Island's third early design, which was used from demo v0.7 to v0.8b. 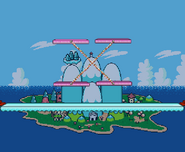 The camera a little more zoomed in on the third early design. 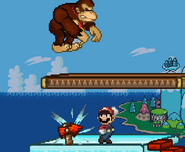 Mario (in his early design) after using his up throw on Donkey Kong. 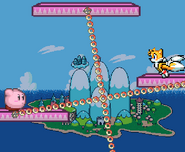 Kirby and Tails on the wheel. 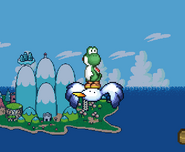 Yoshi standing on top of a Goonie.