Yeah Jam Fury: U, Me, Everybody! is an action platformer puzzle game developed in conjunction by World Entertainment Studios (formerly WillyWorld Entertainment) and McLeodGaming, released on December 15, 2017 for Microsoft Windows, macOS, and Linux via the digital distribution platform, Steam. It is the follow-up to the Flash game previously released by the aforementioned companies, Yeah Jam Fury, and is the first game the companies released onto a digital storefront, as well as the first to be full-paid game in the history of both companies. Much like in the first game, the player must swap between three characters, Yeah, Jam and Fury, each with their own unique abilities in over 100 levels, to reach the mango at the end of each level.

Yeah Jam Fury: U, Me, Everybody!'s gameplay is similar to that of its predecessor, where the player has to change between the three titular characters in order to overcome obstacles and reach the mango found at the end of each level. Each character comes with unique abilities that will need to be exploited in order to get to the righteous fruit. There is a total of 101 regular levels without counting the tutorial and credits levels. Though there are no lives, the characters may fall from the blocks, immediately "refooting" right in the last Steel Block stood on before falling.

In addition to this, there are several new gameplay elements introduced in this game. For instance, flags now have the power to lock the player into only using certain characters until passing a different flag. Additionally, certain levels feature new "gimmicks" such as time limits, restarting after falling, or mangoes locked behind a certain amount of blocks or coins that must be collected before obtaining the mango.

Controls are mostly unchanged from the first game as well: the A key is used for moving left and the D key is used for moving right while the W key is used for jumping. Depending on the key, the player can switch to a specific character; for instance, the 1 key switches to Yeah, the 2 key switches to Jam and the 3 key switches to Fury. The Q and E keys cycle between them and the Z key is used for quick switching the characters. Yeah has an exclusive additional ability called the Quick Drop, which can be performed with the S key. Additionally, the M key shows the mango location in each level and the P key opens the pause menu. The game also makes great use of the computer optical mouse, as clicking is needed by default to use the special abilities of each character. The cursor takes the form of a colored arrow that works according to the character selected, and it also bears the initial of said character. Like in the previous game, all of these controls can be completely customized in the controls menu, and the player can also use a standard controller.

All of the playable characters play essentially the same as they did in the original game, but they have been expanded to include new abilities.

The game sorts all levels (except the Tutorial and Credits levels) into two lists: A-Side and B-Side. B-Side levels are more challenging variants of their respectively numbered A-Side levels, with the exception of the final level, which is exclusive to the B-Side. They are generally harder versions of their A-Side equivalents, normally adding minor alterations to increase the difficulty, but overall share the same name, save for an exception.

Stage Builder is a game mode unlocked after clearing ten A-Side levels. It allows the player to design their own levels using a grid-based system and assets from regular levels, including objects, themes, and gimmicks, many of which must be unlocked under other criteria. Created levels can then be shared, either by uploading them to the Steam Workshop or exporting them as a separate file.

All levels in the game can be played cooperatively with up to three players at once. Each controls a single character, and all players can switch in at any time.

Following the successful release of Yeah Jam Fury to Newgrounds, the game's developers grew interested in releasing the game commercially. After several small teasers, it was officially announced on September 2, 2012 that the game was planned to be released to Steam through Steam Greenlight.[1] This release would also include additional content scrapped from the initial release, including more levels, a Stage Builder, replays, more unlockable content, and the ability to import save data from the browser version of the game. The Steam Greenlight page for the game launched the same day.

In 2013, the developers learned of the Nintendo Web Framework, a toolset allowing web-based games to more easily be ported to the Wii U. After applying and getting accepted for it, the developers decided instead to remake the game from the ground up in HTML5.[2] This would include updating the game visually as well, with the three titular characters receiving new designs accordingly.[3]

During development of the remake, several new gameplay features such as Ice Blocks and locking flags were implemented, and new levels were designed to take advantage of them. Eventually, the new levels designed around these features outnumbered the original game's levels, and the developers believed that the remake could stand on its own as a new game entirely.[3] Thus, the developers worked to give it more features and content to make it worthy of being a console game, such as more characters and tougher challenges.[4] On July 29, 2014, the new game was teased on Facebook with pictures revealing its new graphical style, the addition of Ms. Carrot, and the game's Wii U release.[5] In May 2015, the Steam release of Yeah Jam Fury was Greenlit, prompting the developers to release the new game to Steam as well.[6]

Due to the scope of the game and interference with the developers' personal lives, development for the game from 2013 to 2016 was slow. Eventually, the Wii U version of the game was cancelled to focus on one platform, as well as due to graphical limitations of HTML5. In order to finish the game sooner, Gregory McLeod quit his job as a web developer in 2017 to work full-time on programming the game.[2] The game and its title were formally revealed on October 25, 2017 as a combined remake and sequel (dubbed "requel"[3]) to the original game, featuring over 100 new and old levels with new and refined mechanics, among other features.[7] The game would eventually release on Steam on December 15, 2017.

The game's preview image on Steam. 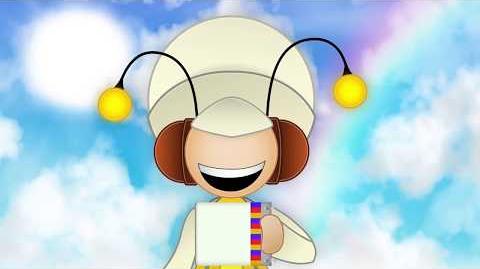 Yeah Jam Fury U, Me, Everybody! Trailer 1
The first trailer released. 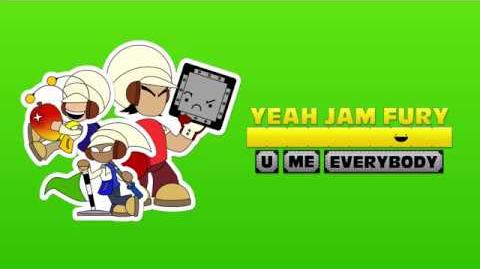 Yeah Jam Fury U, Me, Everybody! - What Is Yeah Jam Fury?
A video used to explain the gameplay. 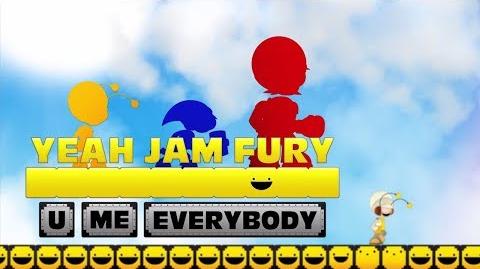 Yeah Jam Fury U, Me, Everybody! LAUNCH TRAILER!
The launch trailer.