Yeah Jam Fury is an action platformer puzzle game developed in Flash by WillyWorld Entertainment (now called World Entertainment Studios) in conjunction with McLeodGaming. It is the first game released by McLeodGaming in six years following the release of the original Super Smash Flash on August 21, 2006, not counting the partially released of the still-in-development Super Smash Flash 2 demos. In this game, the player must swap between three titular characters: Yeah, Jam, and Fury, each with their own unique abilities, to reach the mango at the end of 46 levels.

It was originally planned for the game to have a Steam and Wii U release, which both would include new content, such as additional levels, a Stage Builder, and several new costumes for the three playable characters. On October 25, 2017, it was announced instead as Yeah Jam Fury: U, Me, Everybody!, a follow-up that was released exclusively on Steam on December 15, 2017.[1] The Wii U release was cancelled during development in order to focus efforts on the Steam release.[2]

The player takes the role of the three titular characters, Yeah, Jam and Fury by switching to the correct character needed to overcome certain obstacles. The objective of each level is to reach a mango using the unique abilities of each character in order to clear the level. There are also no lives in the game, as when characters fall off of the level, they will respawn on the last Steel Block stood on following the fall. Records for each level are held based on the time it takes the player to complete it, and players are encouraged to complete each level as quickly as possible.

By default, the A and D keys are used to move the character left and right, respectively, and W is used to jump. To switch between characters, the 1 key switches to Yeah, the 2 key switches to Jam, the 3 key switches to Fury and the Q key switches to the last character used. The M key shows the mango's location in each level and P key opens the pause menu. The game also makes great use of the computer optical mouse, as clicking is needed by default to use the special abilities of each character and clear levels. The cursor takes the form of a colored arrow that works according the character selected. All of these controls can be completely customized in the controls menu, and the jumping, special abilities, and switching controls can have two inputs assigned at once.

There is a total of 46 levels in the game, including 42 regular levels and 4 additional, optional tutorial levels. All levels are played in succession, coming one after another, once the last level is cleared. The first six levels are unlocked from the start, and each subsequent set of six levels is unlocked after clearing the previous regular levels. Tutorial levels and are completely optional to clear.

The first early concept art of Yeah, Jam, and Fury.

Yeah Jam Fury began development in late 2011 during Gregory McLeod's senior year of college at Stevens Institute of Technology. He was tasked with creating a game for his senior project, and he teamed up with William "Willy" Abeel, Chris Federici, and Rob Ertz to create it. Willy, who took over as designer, wanted to explore game mechanics and quickly came up with the concept of the game, which would be based on separating the mechanics of one character into multiple characters that are all required to solve puzzles.[2]

Willy also designed the three playable characters after sketching them in his notebook, which occurred shortly after learning about the project.[3] The three characters were all designed to complement each other, with each having a unique design, personality, and set of mechanics. Specifically, Yeah would be based on precision by fabricating blocks, Jam would be based on distance by navigating around them, and Fury would be based on utility by eradicating those blocks. The three would receive multiple design changes over time, with Yeah ultimately being chill and slow, Jam being cool and fast but challenging to control, and Fury being massive and difficult to move.

In addition to designing the game's characters and concept, Willy also assisted in coding it. However, the coding was mainly done by Gregory, Chris, and Rob, with Gregory also arranging music tracks for the game. Over the course of its development, the game was kept a secret from the public until its eventual release to Newgrounds on June 30, 2012, when it was revealed as a surprise announcement.[4]

On September 2, 2012, it was announced that the game was planned to be commercially released to Steam through Steam Greenlight.[5] This rerelease would include many of the features initially planned before being scrapped and left unused within the game during development, such as additional levels, a Stage Builder, replays, and more unlockable content, as well as the ability to import save data from the browser version of the game. The Steam Greenlight page for the game launched the same day.

In 2013, the developers learned of the Nintendo Web Framework, a toolset allowing web-based games to more easily be ported to the Wii U. After applying and getting accepted for it, the developers decided instead to remake the game from the ground up in HTML5.[6] This would include updating the game visually as well, with the three titular characters receiving new designs accordingly.[7]

During development of the remake, several new gameplay features such as Ice Blocks and locking flags were implemented, and new levels were designed to take advantage of them. Eventually, the new levels designed around these features outnumbered the original game's levels, and the developers believed that the remake could stand on its own as a new game entirely.[7] Following this, the Steam and Wii U release of the game was canceled in favor of a follow-up, which would become Yeah Jam Fury: U, Me, Everybody!.

Yeah Jam Fury received very positive reception from its launch date. As of October 2020, it currently holds a score of 4.27 / 5.00 on Newgrounds. It was also awarded a "Daily 5th Place" trophy on Newgrounds on July 1, 2012, and it was added to the front page of the website the following day.

Reviewers lauded the game's concept of switching between three characters to advance, which was seen as creative and innovative. The gameplay itself was generally seen as simple and addictive, with very challenging and clever level design. Many reviewers also praised the art style and music, which were seen as creative and appealing. The three titular characters were met with mixed reception; although many reviewers praised their unique traits, many also found them to be too slippery and clunky, particularly with Jam's and Fury's special abilities. The game's voice acting was generally praised as well for being unique and establishing personality in the characters, but many people found it to be annoying.

However, the game mainly garnered criticism for not being accessible. In particular, the game's tutorial levels were criticized for not being clear enough on teaching the player how to play the game, relying on background images without text and not showing the game's controls, which could only be found in the controls menu and the preloader. This left many players confused and unable to advance, as they could not figure out the controls and abilities of each character. Many also argued that the controls themselves were slippery and not user-friendly, leading McLeodGaming to update the game with a controls editor a month after the game's release.

The icon for Yeah Jam Fury on Newgrounds and Kongregate. 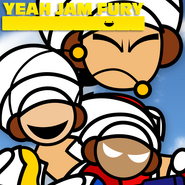 The preview image for Yeah Jam Fury on Steam Greenlight. 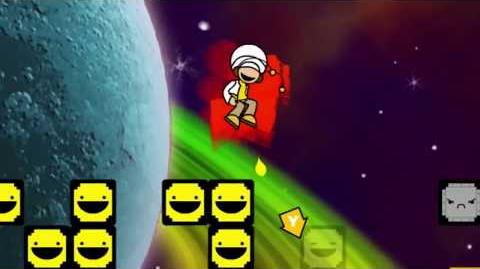