World of Starcraft: Episode 1 is the remake of the similarly titled first episode of World of Starcraft, both cartoons made by Gregory McLeod and published by McLeodGaming. In this cartoon, however, the story has been changed, another hero named Brian has arrived and the enemy alien race, Hydralisks, has also been shown.

The story begins with Brian and Steve killing a group of Hydralisks. While Brian is easily killing all the Hydralisks, one Hydralisk suddenly attacks him from behind. The Hydralisk is just about to kill Brian when Steve attacks it from behind. As they stand, looking at the Hydralisk Steve killed, Steve notes that if it hadn't been for him then Brian wouldn't have an arm. Brian's arm suddenly falls off, and he faints.

Brian is then brought to the hospital, where his life is saved. Music plays as his operation completes, and when he asks where it is coming from, Steve shows him his new Nintendo DS2 with which he was playing a Metroid game. While Brian is playing with it, Steve says to him that he had to go to the bathroom. While in the bathroom, he feels as if he had seen some strange alien, whom he tries to shoot but misses.

After Brian recovers, he notes that the Hydralisks are holding a party at the Hydra-Hive, which they decide to crash. They then enter their rocket ship and travel into outer space towards Hydra-Hive, where the Hydralisks are dancing. Once they arrive, they crash the party with the song "Get Low" by Lil' Jon, which they suddenly start dancing to. As their dance finishes, they find themselves surrounded by Hydralisks. The screen blacks out, and Steve notes that crashing the party was not a very good idea as the cartoon ends.

The first photo been shown on the title screen while the cartoon is loading.

The second photo been shown on the title screen while the cartoon is loading.

The third photo been shown on the title screen while the cartoon is loading.

Music being played before showing the title screen. 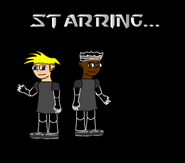 Steve and Brain at the hospital.