McLeodGaming Wiki
Register
Don't have an account?
Sign In
Advertisement
in: Incomplete articles, Articles in need of images, Fraymakers,
and 3 more

This article is about Welltaro's appearance in Fraymakers. For general information about the character, see Welltaro.

Welltaro is a playable character in Fraymakers. He was unveiled alongside the game's Kickstarter campaign and is planned to be made available at the launch of its Early Access release.

Hailing from the game Downwell, Welltaro's playstyle revolves around launching vertical projectiles often with the ability to spike midair opponents, while dealing powerful damage. His primary weapon is his gunboots, which allow him to fire bullets and other projectiles from the heels of his feet. He uses them in many parts of his moveset, including his special moves, down aerial, and airdash, as well as his midair jumps. He also utilizes various weapons, upgrades, and styles that appear in Downwell. One of Welltaro's unique mechanics is that his gunboots have a limited supply of ammunition for launching projectiles, which can be refilled by landing on the ground or hitting opponents with his aerial attacks. 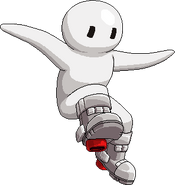