This article is about Wario's appearance in Super Smash Flash 2. For general information about the character, see Wario.

Wario is currently ranked 31 0f 47 on the current tier list, 11 places below his position in the previous Tier List, placing him in the C tier. Wario's notable strengths include a good air game, decent combo ability, a good grab and throw game, and great KO moves in his forward smash, Shoulder Bash (in the move's final frames), down throw, dash attack, up smash, and the later stages of Wario Waft. Though he lacks a projectile, he can easily dodge them using his good speed for a fighter his size and weight, and his excellent air mobility allows him to wobble in and out of his opponent's range, which gives him some time to throw out a few spacing moves, or a finisher if he can. He also possesses good recovery options, as Shoulder Bash covers a decent horizontal distance, and a fully charged Wario Waft covers a distance equal to the distance covered by his up special, Corkscrew, allowing him to extend his vertical recovery as well.

However, Wario's biggest flaw is his short range (possessing the shortest grab range), which makes him vulnerable to characters with attacks that have a disjointed hitbox (ex. Meta Knight, Lloyd). As Wario possesses an above average weight and is a high faller, the majority of the cast can easily combo him (although Wario can avoid this by using his air mobility to escape attacks). He has a couple of KO options with his forward smash, up smash, Wario Waft, forward tilt, up aerial, and the final frames of Shoulder Bash, but these do have considerable amounts of starting and ending lag, making him easier to punish, and Corkscrew does not gain much vertical height on its own, giving him a relatively poor vertical recovery if he does not have a full-charge Wario Waft on hand. Furthermore, due to his poor ground mobility, poor range and lack of a projectile, he is forced to rely on close-range attacks to damage or KO the opponent.

While Wario appears to have a small, dedicated player base, he has poor representation in online tournaments. Some Wario players do not actively participate, and the few who do participate do not place high.

Wario can be described as an unorthodox character due to his attributes. His most unusual trait is his high air speed and air acceleration, giving Wario the ability to effectively camp in the air, and wobble in and out of the opponent's range. He has powerful finishers in his forward smash, Shoulder Bash (in the moves final frames), up smash, up air, forward tilt, and the Wario Waft (depending how long it has been charged). His great air mobility, combined with most of his aerials having good priority grants him a good air game and good approach options in the air. Wario also has an effective edgeguarding game with his back air and Chomp. He has effective combo starters in his down smash, down tilt, Chomp, up tilt, and up throw. Due to Wario's size, he is not as susceptible to shield poking like other characters. He has a good grab game with his forward and up throw being chain grabs on big characters and fast fallers while they are good combo starters on other characters. His back throw can be used as KO moves near the ledge on light characters. Furthermore, Wario's weight, air mobility, and falling speed makes him a hard character to KO.

However, Wario suffers from poor range (having the shortest grab in the current build) which leaves him is vulnerable to characters with disjointed hitboxes (ex. Ichigo and Sora). Due to not having a projectile, poor ground mobility and reach in his attacks gives him problems approaching on the ground. As a result, Wario must rely on his air game to approach and combo opponents. His recovery is predictable and gives him trouble recovering against good edgeguarders. Furthermore, due to his medium to high weight and being a high faller, he is susceptible to certain chain grabs if he doesn't avoid them properly.

When Wario was first introduced; he was seen as a mid-low tier character. In the tier lists for demo v0.7; Wario ranked 11th of C tier on the first list and 12th of E tier on the second list.

In demo v0.9a; Wario was originally seen as one of the worst characters in the demo, but ranked 12th when players started noticing his strengths and is considered a mid-high tier character.

In demo v0.9b, the changing metagame of other characters, the addition of new ones and lackluster changes to Wario brought him down to be 28th in C tier. The changing metagame did not help Wario by much where he rose to 26th of C tier, but he is still seen as a bottom tier character. On the final tier list, Wario dropped to 30th, dead last on the tier list where he was seen as the worst character in the demo.

In Beta, on the first tier list, Wario ranked 22nd in B- tier, which was a noticeable rise from his 30th place in v0.9b. However, he ended up dropping to 36th of C- tier on the second tier list. In the current tier list, Wario is ranked as 20 of B.

Wario next to Starfy on Steel Diver.

Wario hitting Lloyd and Mega Man with his forward smash on Tower of Salvation.

Wario grabbing Peach while Mario dashing towards them on Princess Peach's Castle. 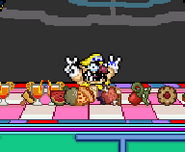 Wario surrounded by lots of food on WarioWare, Inc.. 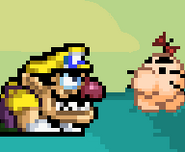 Wario crouching next to Mr. Saturn on Planet Namek. 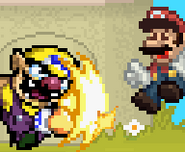 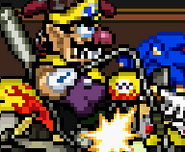