WarioWare, Inc. (メイド イン ワリオ) is a starter stage in Super Smash Flash 2. It is based on the stage of the same name from the Super Smash Bros. series and includes the same characteristic feature that takes players to compete on a random microgame from the WarioWare games, where successfully completing it rewards the players in some way. The SSF2 variant, though, features new microgames. Though once considered a neutral option in competitive play thanks to its simplistic layout, it was later banned due to its tiny size and short boundaries. It currently stands as a counterpick due to the blast zones being much farther from the stage.

The stage is found on the common elevator level of the WarioWare games, depicting a hand-drawn pig on the door of the elevator. Like the stage in the official Super Smash Bros. games, it features a solid hard platform with four hovering pass-through platforms. Every 30 seconds, a microgame has the chance to appear at random, and players that complete it will either become giant, gain invincibility, or heal 50% damage. The stage returns to the elevator room after each microgame, but occasionally the platforms will not reappear and another microgame will immediately follow.

This is a list of the eight microgames that appear on this stage accompanied by the commands given at the start and a description of they are completed.

Despite WarioWare, Inc. being a small stage giving advantages to characters with more zone control, it is currently a counterpick in competitive play. Though it was banned in v0.9b due to its blast lines being too close to the small stage, that problem has since been fixed.

The main area of the stage, the elevator, takes place in the "tower" sections where all microgames are shuffled randomly; a common feature of all WarioWare titles, though each one features different animals. The pig is featured in the original WarioWare, Inc.: Mega Microgame$!, and appears as it does in "Variety Tower", more commonly known as "Easy" as it is labeled in the menu. Furthermore, the rest of the stage borrows a good amount of features and elements from the WarioWare games; foremost being the presence of the microgames (the main focus of the whole series). Furthermore, the textures used on this stage are also found in the WarioWare series. The main floor, for example, is modeled after the dance floor of Club Sugar while the rest of the stage uses the texture of the walls found in Wario's house.

Of the eight microgames that appear on this stage, six of them originate as microgames from WarioWare, Inc.: Mega Microgame$! and share the same elements. These include Button Masher, Crazy Cars, Dodge Balls, High Treeson, Jumpin' Rope, and Sole Man. The other two microgames, Don't Move! and Taunt!, originate from the stage of the same name in Super Smash Bros. Brawl.

Jimmy T. appears in the Taunt! microgame while Wario and Sora are taunting. 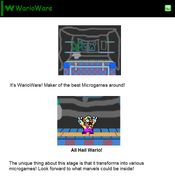 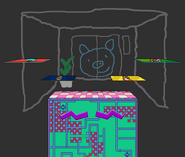 Prior in v0.8a, four of Wario's friends could be seen on the platforms.
Community content is available under CC-BY-SA unless otherwise noted.
Advertisement