McLeodGaming Wiki
Register
Don't have an account?
Sign In
Advertisement
in: Articles in need of cleanup, Final Smashes, Attacks,
and 5 more

When performed, Wario eats a clove of garlic and laughs as he transforms into Wario-Man, his costumed alter-ego. Wario-Man is able to move freely and has a full moveset consisting of modified versions of Wario's normal attacks, which are generally changed to deal more damage and knockback, have less startup or ending lag, or have new properties such as lifting him into the air. Additionally, he moves faster, jumps higher, falls more slowly, and has much more knockback resistance, though he can still receive damage from attacks. After approximately 20 seconds, Wario-Man will revert back to Wario's normal form, ending the move.

Wario-Man originates from WarioWare: Twisted! and WarioWare: Touched!, appearing as the alter-ego for Wario. In both games, once the player has beaten all of the microgame compilations from the other characters, the player unlocks Wario-Man's microgames compilation. In WarioWare: Twisted, Wario transforms into Wario-Man after falling into Dr. Crygor's invention: the Gravitator. In WarioWare: Touched!, Wario transforms after consuming a rotten piece of garlic. This "new character" then appears on the main menu with a brand new set of microgames available to attempt. Wario-Man's microgames were the last of its kind both times and are more challenging than the preceding microgames. 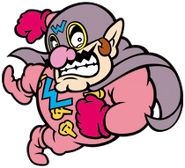 Wario-Man's art, used from v0.7 to v0.8b. After that version, Wario-Man used the same artwork as Wario and later received a new one in Beta 1.2.

Wario about to transform into Wario-Man on Nintendo 3DS.

Wario starting the transformation into Wario-Man on Meta Crystal.

Wario-Man about to revert back to normal Wario.

Wario about to transform into Wario-Man.

The Zangief version of Wario-Man.

Wario-Man using his down smash, while Peach and Mario are idling on Bomb Factory.

Wario-Man using his up smash with Goomba while Mario is stunned on Mushroom Kingdom III.

Wario-Man using up throw on Naruto on Hidden Leaf Village.