Waiting Room is an unlockable stage in Super Smash Flash 2 based on the Online Practice Stages from the Super Smash Bros. games. Much like this stage, it is primarily used before an online match begins for the player to fight a motionless Sandbag while waiting for other players. However, it can also be played as a selectable stage, in which it serves as the home stage for the playable Sandbag.

Originally, it took its design from the Online Practice Stage from Super Smash Bros. Brawl and replaced the two Test Stages in v0.5a of the demo, but it was removed in v0.9a because of its similarities with Final Destination and was replaced by the similarly-structured Nintendo 3DS. The stage was reintroduced with a new custom look for v0.9b when Online was first implemented but was not selectable for regular matches. This changed with the release of the Beta version, which once again made it a select stage with minor modifications.

This stage consists of a large, floating black and gray platform in space with a large planet above it in the background. The platform contains a scrolling black banner directly below the edge of it facing the screen that repeatedly displays, "Please Wait..." in capital letters that transition between the colors of the rainbow. There is also a couch on each sideline of the platform in the background and a Sandbag on top of each one, with the left Sandbag occasionally blinking and the right Sandbag lying down and sleeping. There is also a Sandbag Jr. sitting next to the one on the left couch and there is another Sandbag leaning against the right couch wearing a pair of sunglasses. There are two floating monitors on opposite ends of the stage that both display the SSF2 logo.

Waiting Room functions identically to Final Destination with minimal differences. As such, it is currently a counterpick, sharing a stage strike with Final Destination. However, Waiting Room has often been banned and made available only through the Modified Gentleman's Clause, in which Waiting Room and Nintendo 3DS may be agreed upon by both players in addition to legal stages.

As stated, Waiting Room is based on the Online Practice Stages from the official Super Smash Bros. series. The modern design of this stage is original to SSF2, and it appears to be based on the design of the main menu, which was designed by Jamal Ransaw and introduced in v0.9 of the demo. The planet it lies beneath is most likely the same one that is shown in the background of the menu, and the stage itself utilizes the same color scheme as the menu borders and main navigational buttons.

Ichigo and Sora battling on the Halloween theme.

Boo's cameo on the Halloween theme.

Yoshi next to candy cane on the Christmas theme. 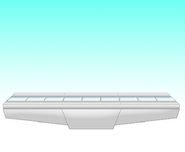