Viewtiful Joe (ビューティフル ジョー) is the protagonist of the Viewtiful Joe games, a series made by Capcom. The Smash Flash DOJO!!! originally confirmed him to appear in Super Smash Flash 2 as an Assist Trophy character on January 21, 2011, but after v0.8a and later demos were released with no sign of Joe's appearance, coupled with the fact developers have never released an official statement regarding his inclusion, his status is now unknown.[1]

Joe is a laid-back movie-lover, that would often go to the cinema to see his hero 'Captain Blue' on the big screen. However, during a routine visit the villain of the film suddenly reached out from the screen and Joe's girlfriend Silvia was sucked into Movie Land. Without hesitation, Joe chases her and ends up in Movie Land on his own. He is given the 'V-watch', with will allows him to change in the red-clad superhero 'Viewtiful Joe' upon saying his catchphrase "Henshin a Go-Go, baby!" (this would later become a staple in the series). As Viewtiful Joe, Joe can use 'VFX' (video effects) such as 'Slow' and 'Mach speed' to traverse through level.

Besides his own series, Joe (as Viewtiful Joe) is also a playable character in both Tatsunoko vs. Capcom and Marvel vs. Capcom 3: Fate of Two Worlds.

Viewtiful Joe was initially envisioned to be an Assist Trophy character in SSF2. Upon being summoned, Joe would have walked around and fought alongside his summoner, with his own little moveset. Joe was described as 'Intelligent Assist Trophy', which meant that he would not focus on one attack or one opponent. Most of Joe's moves were not revealed, but his Mach Speed and Voomerang attacks were confirmed to appear. 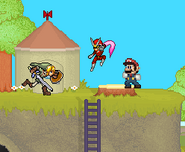 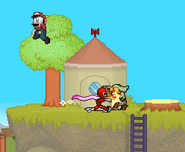 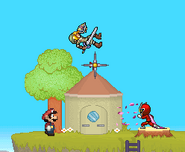