Twilight Town (トワイライトタウン) is a starter stage in Super Smash Flash 2, and is the home stage of Sora.

This stage is banned in competitive play. Not only is the stage very large, but it also contains many walls, which give a disproportionate advantage to characters that specialize in KOing vertically. The top-left corner of the stage is a cave of life, making it a prime camping spot. There are also a few pits of death, which gimp certain recovery moves while providing another means for vertical KOers to get guaranteed KOs.

Twilight Town was first introduced during the events of the game KINGDOM HEARTS: Chain of Memories and later reappeared in KINGDOM HEARTS II and KINGDOM HEARTS 358/2 Days. Twilight Town is the hometown of Roxas and is infested with Nobodies. Despite its subtle atmosphere, Twilight Town is one of the largest worlds known. It is located in between light and darkness, similar to Castle Oblivion and The World That Never Was. Like its name implies, this world's sun is always in the same position in the sky. Twilight Town is a quiet city in endless sunset. Much like Traverse Town in the previous game, it is divided into several distinct districts. These are commonly known as Market Street, Sunset Terrace, and Yen Sid's Tower.

Pikachu with a Beam Rod and Waluigi with a Trophy Stand while Sora taunts.

Sora and Peach laying down while Wario taunts down below.

Mario and Peach with a Heart Container while Sora and Zelda are taunting at them. 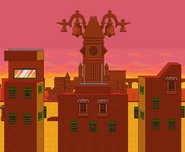 Bomberman using Jetpack when Link is about to attack him on Twilight Town's night version.