Trophies represent various characters, stages, items, and other elements from the many games released by Nintendo and third-party companies. Collecting them is optional, and do not affect the gameplay of the other modes. They also provide information about the characters. Within the Super Smash Bros. world, the concept is that all of the characters in the are merely animated trophies brought to life for the solely purpose of fighting. This theme is especially outlined in the opening movie of Melee and Brawl's Subspace Emissary.

Trophies are featured in Super Smash Flash 2, having the similar characteristics to the trophies of the official Super Smash Bros. games. Trophies mainly appear during the continue screen and final results screen of Classic and All-Star, in which they consist of the player character on top of a large base. On the continue screen, the trophy falls on its side and lacks color, and choosing to continue will cause it to stand back up and regain its colors. On the final results screen, the colored trophy appears on the right side of the screen.

There also exists an item called the Trophy Stand, which is the base of a trophy. When this item hits a fighter after being thrown, it will encapsulate the character in a trophy form, rendering them immobilized and allowing opponents to pick up and throw the trophy. Each character stays in a unique pose while encapsulated in trophy form.

Bronze (Easy without continue, or Normal after first continue)

Silver (Normal without continue, or Hard after first continue)

Gold (Hard without continue, or Insane after first continue) 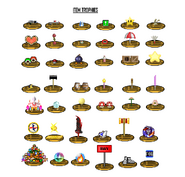 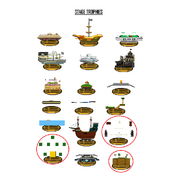