Trigger Item was a joke item to be included in Super Smash Flash 2. It was confirmed on April 1, 2011 as part of an April Fools prank on an update that merely stated that the Smash Flash DOJO!!! would no longer be updated, but if someone continues scrolling down the page, they would notice the Trigger Item's confirmation.[1]

The Trigger Item would take the appearance of any other items and, hence the name, when a character was to approach it and grab it, it would explode in the form of the "Objection!" speech balloon (from the Ace Attorney series) which would send the character flying. The Trigger Item was also meant to explode in the form of the "Hold it!" speech balloon, which would render immobile the character who picked up it.

Speech balloons are one of the most iconic elements of the Ace Attorney series, appearing frequently in every game of the series. They generally appear when a character yells out the word on the balloon. They use spiky white shapes and stylized red letters to convey certain exclamations with sudden, over-the-top emphasis. The "Objection!" and "Hold it!" speech balloons both originate from Phoenix Wright: Ace Attorney, the original game in the series, and they are mainly used during cross-examinations of witness testimonies or rebuttals to arguments. Characters tend to yell "Objection!" when they are about to point out a flaw in an argument or testimony, and they tend to yell "Hold it!" when they are about to interrupt one. 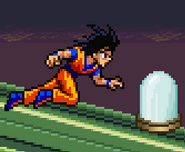 Goku about to take the Trigger Item in the form of an Assist Trophy on Central Highway. 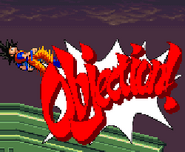 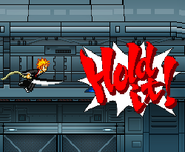 Ichigo running to the "Hold it!" speech balloon while Mega Man gets stunned by it on Shadow Moses Island.