A tilt attack, also known as a strong attack, is an attack in Super Smash Flash 2 that includes slightly pressing the attack button in a direction. It has three variants: up, side and down. Use each by holding a direction, and then pressing the attack button. Weapon holders (such as Link or Ichigo) have long ranged tilt attacks, while melee fighters (such as Mario, Wario, and Bomberman) have short ranged tilt attacks. These can be used to start combos. 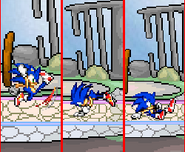 Sonic performing the three tilt attacks in an older build. Taken from the old DOJO!!!.