Test Stage 2 was originally a starter stage in Super Smash Flash 2. It was one of the first playable stages in the game, along with Test Stage 1 and Battlefield. In v0.5a of the demo, this stage and Test Stage 1 were replaced with Waiting Room.

This stage is simple, albeit slightly more complex than Test Stage 1; it consists of a large green rectangle with two hills and a white background with two ledges, with one on each side of the terrain. 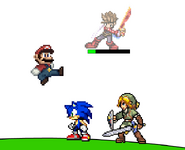 Lloyd charging Demon Fang while Mario is using his neutral aerial and Sonic and Link are standing.