McLeodGaming Wiki
Register
Don't have an account?
Sign In
Advertisement
in: Articles in need of images, Stages, Stages in Super Smash Flash 2,
and 5 more

This article is about Temple as it appeared in SSF2. For the Super Smash Bros. stage that it is often confused with, see Hyrule Castle. For other uses, see Temple.

Many competitive players agree that Temple is among the most unbalanced stages in the entire Super Smash Bros. series. Temple is disadvantageous towards characters whose moves deal horizontal knockback, such as Captain Falcon, because the stage is so horizontally large that most moves that would normally KO horizontally are not consistent until extremely high percentages. Also, the stage gives an advantage to characters who have largely vertical KO moves, like Fox and Pikachu. Temple's size also promotes camping. It gives an obscene advantage to fast characters with projectiles, who can spam them, rack up damage from afar, and time out the match by running around the large stage. Characters with good recoveries, such as Jigglypuff, are also greatly advantaged; they can consistently do the Hyrule Jump and circle camp around the stage. Temple also features a cave of life on the bottom section that allows characters to live up to obscenely high percentages, especially if they wall tech or ceiling tech whenever they are hit. Overall, because its size forces the game to be played completely differently (including the over centralization of camping and giving advantages to already top-tier characters), Temple is always banned from tournaments.

Much like its SSF counterpart, Temple is based on Zelda II: The Adventure of Link. In The Legend of Zelda: Ocarina of Time, the name of the dungeons is based on the type of environment around it or the location with "Temple" at the end. However, in Zelda II, these dungeons are called "Palaces". Hyrule is where the Temple is located, hence being referred sometimes as "Hyrule Temple". Also the palaces in Zelda II are infamous for their length, which could explain the size of the stage. The music for Temple is a redone version of the Palace theme from Zelda II.

In Zelda II's overworld map, a palace looks like a rooftop supported by three pillars. In the background of the stage, it is possible to see a building like this on top of the hill except it has more than three pillars.

Mr. Game & Watch taunting at Bomberman, who is holding a Bomb.

Temple, as it appeared in the first Smash Flash DOJO!!! in early 2008. 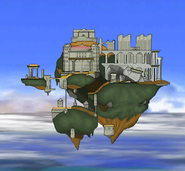 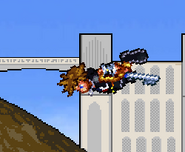 Link standing on the stage.

Link about to attack Captain Falcon while he is in a helpless state.

Link is sent flying after getting hit by Marth's forward smash.

Ichigo walking on a platform.
Community content is available under CC-BY-SA unless otherwise noted.
Advertisement