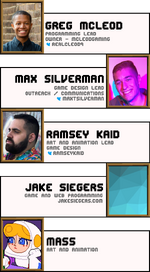 The five members and six of the collaborators of Team Fray, as listed on the Fraymakers Kickstarter page.

The core members of the team consist of both current and former Super Smash Flash 2 developers. Each member aims to leverage their expertise from working on the game into the new project. In addition to the core members, several other contracted developers have collaborated with the team as additional contributors.

Team Fray consists of five core members who oversee development, with each being in charge of a specific aspect of the game. Below is a list of these developers categorized by the areas of development they are a part of.

Various other developers, though not considered a part of Team Fray, have collaborated with the team to contribute additional work to the game. This may include artwork, programming, music composition and arrangement, or voice acting. The rightsholders to the game franchises featured in Fraymakers can also be considered collaborators, though they generally do not play a direct role in its development. Below is a list of collaborators categorized by the areas of development they are a part of.