McLeodGaming Wiki
Register
Don't have an account?
Sign In
Advertisement
in: Pages with broken file links, Incomplete articles, Articles in need of images,
and 9 more

Tails is a newcomer starter character in Super Smash Flash 2, accompanying Sonic as the representants of the Sonic franchise. His sprites are completely custom made and they are based on his modern appearances, such as Sonic Generations, Sonic Colors, and Sonic Lost World. His moveset references from the Sonic game appearance, Sonic the Fighters and Sonic Battle.

Tails is ranked 8th out of 40 on the current tier list, placing him in the A tier; 7 spots lower from his 1st place position in S tier on the previous Beta tier list. One of Tails' strengths is that he has good priority in many of his attacks, a solid air game, a great recovery, good combo ability and KO moves in his up smash, down smash, up aerial, and his back aerial. Tails has an excellent recovery with five midair jumps and good air speed. He can use Airlift, Spin Dash, and his back aerial to help him travel through the air horizontally, while his Energy Ball Blaster can stall him in the air for a few moments. He has a solid down aerial meteor smash that can net him early KOs. He has good mobility with his good air speed and his Pseudo wavedash. Most of his attacks flow into each other perfectly giving him amazing combo ability.

However, he has problems dealing with characters who posses disjointed range that can go through his higher priority attacks, ex Ichigo and Marth. He has problems KO'ing his opponents because he has few KO options and most of his KO moves require good set ups. His projectile is slow, easy to avoid and covers a short distance. He also has a high learning curve which requires tons of practice to master him.

Regardless of Tails' flaws, he is a good character with great potential. It should be note that Tails requires a lot of knowledge on how to use the character and the various techniques that he is able to perform, to be played at his full power. Tails has a growing player and has decent representation in online tournaments, with experienced Tails players making great use of his advanced techniques. Chaos0 is a notable example as he often does well in tournaments with Tails along with Yix9 dominating the SSF2 metagame as well.

Tails has great mobility with having the sixth best dashing speed, good air speed, and having pseudo wavedash that, when fully charged, can cover the entire stage of Final Destination, thus giving him great mobility overall. Tails has amazing combo ability with his attacks being able to flow into one another perfectly. Tails has a projectile in his Energy Ball Blaster that has high priority and does good shield damage. He has kill moves in his up smash, down smash, his up and back aerials. He has a powerful meteor smash in his down aerial which can to lead to early kills on his opponent. His down special, Spin Dash, is one of the main forces behind his advanced techniques in that it is required to perform his pseudo wavedash, can cancel out low-priority projectiles and gives him a variety of options to mix things up.

However, Tails suffers from poor range in the majority of his attacks. His projectile is slow, easy to avoid and leaves him vulnerable for a few seconds making it unreliable. Due to having few KO moves; Tails needs to keep them fresh or risk not being able to KO his opponent. He also does not have any reliable set ups that will lead into his KO moves, thus requiring him to get a hard read to net a KO or he will have to over rely on his down air.

Tails has below average weight, which allows him to be KO'd horizontally early. This further detrimental with Tails having above average accelerated falling speed which makes him good to combo.

His grab & throw game is rather poor when compared to other characters, possessing the 14th longest grab range in the current demo. His up throw is his only throw that he can gain any follow up from, though it is mainly used off stage to net KOs. Back and forward throw are very weak, not allowing any follow up options and only purpose seems to be to start an edge guard. Down throw might be his worse throw due to it not giving any follow ups or being able to start an edge guard.

Tails is similar to Melee's Fox, in that he has a high learning curve. He needs good reflexes, good strategy and knowledge of how he works in order to play him to his full potential.

In tier lists for demo v0.7, Tails was seen as a top tier character because he ranked 2nd of A tier on the first list and ranked 1st of S tier on the second list. In demo v0.8b; Tails dropped to 16th of D tier from his 1st-place position of S tier which he was tied of with Sonic for having had the largest tier drop from demo v0.7 to v0.8b (dropped by 15 tier positions). In demo 0.9a; Tails rose to 8th of what can considered A tier where he is seen as a top tier character once more. In demo v0.9b, Tails dropped to 11th of A tier where he was seen as a high tier character. However, Tails rose up a spot to 10th of A tier, and is still seen as a high tier character. 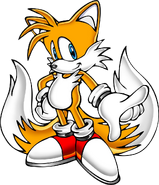 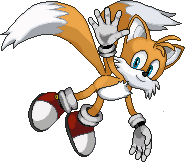 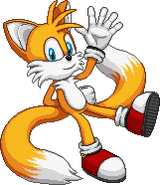 Tails plays his Game Gear from his down taunt.

Tails under the paralysis effect with Remote Robot by Black Mage's Stop, on Chaos Shrine. 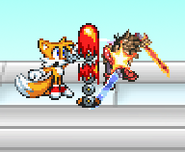 Tails hitting Lloyd with his up smash, on Waiting Room. 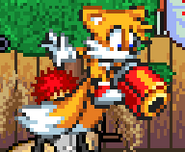 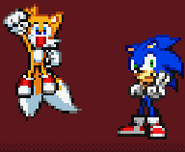 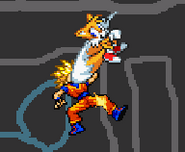 Tails hits Super Saiyan Goku with his down aerial, on WarioWare, Inc..

Tails and Jigglypuff jumping, on Temple.

Tails using his up smash, on Mushroom Kingdom III.

Tails hits Lloyd with his down smash, on Planet Namek.