Super Saiyan Goku, previously referred to as Super Saiyan, was Goku's Final Smash in Super Smash Flash 2 prior to Beta 1.2, when it got replaced with Meteor Combination.

When performed, Goku covers his face with both arms and gathers energy before transforming into his Super Saiyan (サイヤ) form, in which his hair becomes straight and yellow and his eyes become green. Upon transformation, he throws his arms to either side and yells as a great yellow explosion in the shape of a flame surrounds him, dealing 18% damage and moderate knockback to opponents that make contact with it. Super Saiyan Goku is one of the many "Final Forms" in the game, meaning that he is a much different character who has faster and more powerful attacks than his normal form.

Super Saiyan Goku is one of the most powerful Final Forms in the game. His attacks rely more on brute power in both damage and knockback, most of his attacks have little to no startup or ending lag, and he has strong knockback resistance to most attacks, as only some smash attacks and special moves cause him to flinch. These traits, along with his abilities to jump and float infinitely, make it very difficult to KO him.

This form originated in the manga series Dragon Ball. The transformation was first referred through numerous times during the Saiyan and Freeza sagas and finally made its appearance in Chapter 317 of the manga titled, Life or Death (生か死か). Goku was the first person ever shown on the manga to achieve it after witnessing his best friend Krillin's death at the hands of the villain Frieza, using this transformation to ultimately defeat the latter.

The transformation causes Goku's hair to stand on end and turn a golden color. His facial expression becomes sharpened, and the color of his irises turns to a bright emerald green. As a Super Saiyan, Goku's power level is 50 times greater than that of his normal form. Initially, the massive energies involved cause Goku's emotions to be stirred, making it difficult to remain calm. As a pure heart Saiyan, Goku becomes ruthless and overcome with rage. This is first demonstrated when Goku went from a calm, collected fighter to becoming a vengeful warrior, hellbent on avenging his fallen friend, Krillin, even at his own peril. With constant training, Goku eventually managed to control his emotions during the transformation and also achieve mightier forms of the transformation, like the Super Saiyan 3, which increases his power level 400 times greater than his normal form. Super Saiyan 2 and 3 cost too much energy to be maintained, so Goku often uses Super Saiyan God forms instead to enhance Super Saiyan power, which appear in Dragon Ball Super. 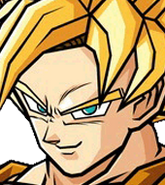 Goku transforming into a SSJ3 when he launches a True Kamehameha.

Super Saiyan Goku stunned while Sonic is in his idle pose on Green Hill Zone.

Super Saiyan Goku after using his up throw on Samus on Final Destination.

Super Saiyan Goku using his down throw at Ness on Emerald Cave.