The Super Mushroom (スーパーキノコ) is the most recurring power-up in the Mario franchise and is also an item in Super Smash Flash 2. The silhouette of the Super Mushroom serves as the series symbol for the Mario universe in the latter as well. Its polar opposite is the Poison Mushroom.

The Super Mushroom can be distinguished from the Poison Mushroom as it has a more brightful color. When a Super Mushroom appears, it will start sliding on the ground to the right side. The effect of the Super Mushroom is simple: any character who touches it will grow in size, becoming bigger for about 10 seconds.

This also grants the following effects:

The Super Mushroom originates from the very first Super Mario platform game, Super Mario Bros. and is the most common power-up in the game. If Mario or Luigi touch a Super Mushroom, they will grow in size, becoming Super Mario and Super Luigi respectively. This Super form makes the Mario Bros. stronger as they are now able to smash brick blocks by jumping below them, it also allows them to withstand a hit by enemies and obstacles, shrinking them back to their Small forms without losing a life. Its conversion and effect in SSF2 is directly based on the fact the Super Mushroom makes the Mario Bros. grow and how they are made stronger are able endure more damage.

In its original appearance, the Super Mushroom has an orange cap with red spots and did not sport eyes whatsoever. The eyes got added for the first time in the Japanese sequel Super Mario Bros.: The Lost Levels, while the Mushroom's standard red cap coloration with white spots would not appear until the release of Super Mario World (prior that, in Super Mario Bros. 3, that coloration was reversed, being a white cap with red spots). The design of the Super Mushroom in SSF2 is based on its current design, which has been standard in the Mario franchise since New Super Mario Bros.

Super Mushroom next to Mario on Mushroom Kingdom.

Zelda and Link running away from Giant Donkey Kong, who have been effected by Super Mushroom and Goku standing on Hyrule Castle.

Link, Isaac, and Black Mage standing against Giant Mr. Game & Watch on Devil's Machine.
Add a photo to this gallery 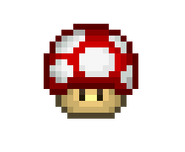 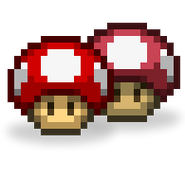 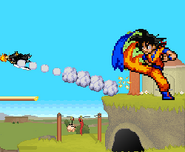 Mario under the effects of the Super Mushroom performing his side taunt.

Giant Mario getting hit by Donkey Kong's down smash.
Add a photo to this gallery
Retrieved from "https://mcleodgaming.fandom.com/wiki/Super_Mushroom?oldid=169576"
Community content is available under CC-BY-SA unless otherwise noted.