Super Fireball (スーパーファイアボール) was originally Fire Mario's standard special move in Super Smash Flash 2. As of v0.9b of the SSF2 Demo, Mario's Final Smash has been replaced with Mario Finale, removing Fire Mario and taking Super Fireball with it.

When performed, the move would work similarly to Mario's Fireball: Fire Mario would release a large, reddish-orange fireball forward from his hand. Unlike Mario's Fireball, the Super Fireball was larger and more powerful, and it would cover more range. Additionally, when used on the ground, the move could be charged, with a larger charge creating a more powerful fireball. When used in the air, Fire Mario would simply shoot a fireball with the charge that is stored at that time. Each fireball would deal 3% damage at minimum charge and 10% at maximum charge with weak knockback, excluding full charge. When fully charged, Fire Mario would instead use Mario Finale. 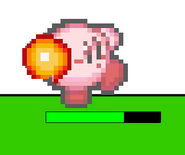