This article is about the Disney character. For one of Peach's turnips, see Vegetable.

Stitch (スティッチ), also known as Experiment 626 (試作品626号), is one of the protagonists of the 2002 Disney film, Lilo & Stitch. He appears in the KINGDOM HEARTS series as a recurring Summon and party-member. In Super Smash Flash 2, Stitch was confirmed in the Smash Flash DOJO!!! but was cut due to Battle Cards popularity was so much minor.

Stitch was created by the self-proclaimed "evil genius" Dr. Jumba Jookiba, under the name of Experiment 626. He was renamed Stitch when he was "adopted" by a young Hawaiian girl called Lilo. Stitch is coated with blue fur, darker patches on the back of his head and on his back as well. A domed nose rests in the center of his face, between large black, tear-shaped eyes. Sharp teeth reside in this extraterrestrial's mouth, along with a long pink tongue. He has clawed hands and stubby legs that have shorter claws themselves. A short tail juts out from his rear.

When in his true alien form, Stitch retains his basic appearance mentioned above, but sprouts an extra pair of arms, spikes on his back, and two antennae.

Upon his creation, Stitch's only purpose was to destroy everything in his path. He would laugh at the chaos he caused, taking pleasure from harming others. However, during the process of the film, Stitch with the help of his friend Lilo, learns the meaning of Ohana, meaning family and begins to be calm and loyal.

As stated above, Stitch could be summoned with the help of Battle Cards. When summoned, Stitch would come with four small plasma shotguns to rapidly fire at the opponents. Stitch is very erratic, as he quickly moves around while he is firing his shotguns. He may also jump and shoot under him. However, since Battle Cards have been confirmed to not appear in the game, it is unknown whether Stitch will make a reappearance in the game. 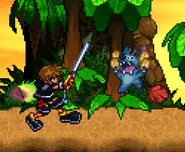 Stitch next to Sora on Jungle Hijinx. 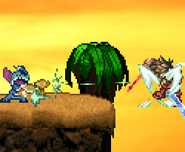 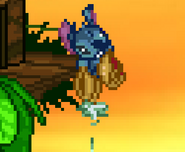 Stitch shooting under him while jumping.