Starfy, known as Stafy (スタフィー) in Japan, is the protagonist of his own series, The Legendary Starfy, and an Assist Trophy in Super Smash Flash 2.

Starfy is a 10-year-old and 36 cm (14.2 in; 1 ft, 2.2 in) tall. He is a relatively easy-going, clumsy, friendly character to get along with. Although he is fairly persistent in completing his goals, he is spacey, absentminded, and so forgetful that often he cannot remember how to perform his own techniques. He tends to maneuver better in water than on land. His signature technique is the "Star Spin", a spinning attack he uses to dispatch foes. He lives in Pufftop Palace (Tenkai, or "Sky-Sea" Palace in Japanese) with his sister, Starly. Starfy can speak, but usually his dialogue in the games is limited to exclamations and sounds. In the commercials, he is voiced by Satomi Korogi. According to Hitoshi Yamagami, producer of the series on Nintendo's side, said that Starfy is neither a star nor a starfish.

Starfy is featured an Assist Trophy in Super Smash Flash 2 following his appearance in Super Smash Bros. Brawl in the same way. When summoned, Starfy will just walk around, but once he approaches any opponent, he will use his "Star Spin", which traps and drags the opponents and deals damage. When not attacking, Starfy can also be attacked, even by the player who summoned him. Attacking him will create a small amount of hitstun and knock him back, and many attacks are strong enough to launch him far away.

Jigglypuff using its forward smash against Starfy on Lake of Rage.

Starfy using Star Spin against Black Mage and Mega Man while Wario dashes towards them on Emerald Cave. 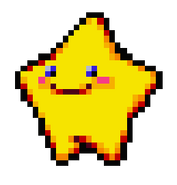 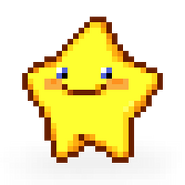 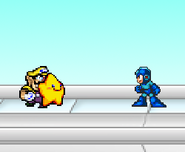 Starfy walking after Wario summoned him, while Mega Man is looking around on Waiting Room. 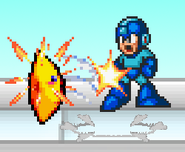 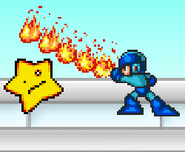 Starfy being hit from Peach with her forward smash on Distant Planet.