The Spiny Shell (トゲゾーこうら), also called by numerous names such as Spiked Shell, Spikey Shell, Blue Shell or Blue Spiny Shell, is a throwing/flying item that appears in Super Smash Flash 2. It is one of four items that comes from the shell family, which also includes the Green Shell, the Red Shell and the Yellow Shell; it is the rarest and most powerful of all four. It is based on the Spiny Shell from the Mario Kart series and has similar properties. It homes in on the leading player. When it hits a character, it will cause an explosion that damages all but the player that threw it.

The Spiny Shell works virtually the same as in the Mario Kart series. At the moment the shell is thrown, it starts flying off screen towards the sides of the stage; opponents that touches it while flying, will be mildly damaged by it. After a time, the Spiny Shell comes descending from above over the leader of the match to explode in contact with them and any other opponent close to him, dealing a lot of damage and a lot of knockback.

Unlike how it works in the Mario Kart series, the Spiny Shell cannot backfire to its thrower, even if they are currently the leader and will be unaffected by the blast. Because of this, it is preferable for the leader to chase after the Spiny Shell and throw it before someone else can use it against them. The Spiny Shell will backfire, though, if the thrower attacks it, resuming to its proper function on them.

Blue Shells first appeared in Super Mario World, being worn by Blue Koopas; they behave exactly the same as the other shells found in the game, with the only difference it grows a pair of wings on Yoshi when he has one Blue Shell on his mouth and could fly around for some time before he swallowed the whole shell. Beginning with Mario Kart 64, the Blue Shell evolved into the Blue Spiny Shell, which now dons spikes on it top, hence the name; when thrown, this shell slides across the track taking out any racer that comes in contact with it, to ultimately reach the lead racer in 1st place and bump into them and launch them into the air. For Mario Kart: Double Dash‼, the shell's name was shortened to Spiny Shell and it grew a pair a wings which allows it to fly over the other racer and overcome any obstacles in the course to reach the lead racer; one the Spiny Shell reaches them, it explodes in contact with a blue blast that launches into the air the leader and any other racer that was closer to him at the moment of the impact.

As of Mario Kart 7, the Spiny Shell reverted to its original, wingless design while still behaving like its winged variant. Since Mario Kart 64, the Spiny Shell has always followed the lead racer so it can backfire to its own thrower if they were found in the 1st place at the moment of throwing the shell.

Yoshi holding a Spiny Shell while taunting on Yoshi's Island.

The Spiny Shell towards Sandbag.

Sandbag being hit by the Spiny Shell from Bowser. 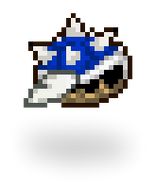 Wario throwing the Spiny Shell on Tower of Salvation. 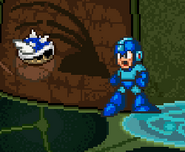 The Spiny Shell about to hit Mega Man.