Spin Dash (スピンチャージ), also referred to as Spin Charge, is a recurring attack in the Super Smash Flash series used by Sonic the Hedgehog.

When Sonic uses the Spin Dash, he curls into a ball form and then launches himself forward at great speed, normally after charging the attack, striking anything and anyone that gets in his way.

In the original Super Smash Flash, Spin Dash is Sonic's down attack. He is only able to travel a fixed distance, as he is unable to charge it like in his original games, but this also means the Spin Dash comes out sooner than expected, and in order to keep rolling, the player has to keep the attack button pressed.

For the reboot, Super Smash Flash 2, Spin Dash has turned into Sonic's down special move. Now the attack requires Sonic to properly charge the attack, otherwise he cannot lunge himself forward. This is done by mashing the special move button. There are other changes on Sonic's Spin Dash compared to its SSF counterpart; for instance, it can be controlled now, allowing the player to change its direction at will, which is required in order to keep the Spin Dash going, and Sonic can jump out of it.

Before Super Sonic became a transformation Final Smash in the Beta version, Spin Dash was his side special move.

While charging, Sonic could be moved horizontally freely, and even jump. When released, the move could be cancelled by pressing the special move button. Comparing to Sonic's version, Super Sonic's attack dealt much more damage, and had a much longer duration. Lastly, the player could jump during the move multiple times, where with Sonic's move, they can only jump once, and the move would end upon the player's landing.

However, Sonic could not end the move facing backwards, and could not charge the move by mashing the button; the button needed obligatorily to be held. Homing Attack replaced Sonic Wave in demo v0.7.

Spin Dash is a technique that was introduced in the SEGA Genesis game, Sonic the Hedgehog 2, that can be performed with both Sonic the Hedgehog and Miles "Tails" Prower. To use it, the player has to crouch and press the A, B, or C button to gather speed; by releasing the button, Sonic or Tails would roll forward at high speed. This move is very convenient to gain speed so shuttle loops can be crossed easily or to take out some Badniks on contact. Since then, the Spin Dash became a regular technique in the Sonic games, so much to the point of becoming synonymous to the series itself.

The conversion for SSF is a more simplified version of the attack from Sonic the Hedgehog 2 onwards, as charging is not possible and the distance traveled is fixed. On the other hand, the conversion for SSF2 is a more faithful recreation of the Spin Dash as it can be charged now, the player has full control of it and it is possible to jump out of it; a subtle difference, though, lies on the fact the player has to mash the button to charge it, something that was not required in the original games.

Sonic about to use Spin Dash while charging repeatedly on Green Hill Zone. 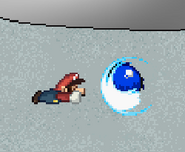 Sonic preparing to do a Spin Dash.

Sonic attacking Kirby by his Spin Dash on Hueco Mundo.