This article is about Sora's appearance in Super Smash Flash 2. For general information about the character, see Sora.

Sora is a veteran starter character in Super Smash Flash 2. His sprites are custom-made and based on his appearance in KINGDOM HEARTS II.

Sora is currently ranked 20th on the tier list, placing him at the top of the A- tier, a small rise from 22nd in the last tier list. Sora's strengths include a great combo ability, good range in most of his attacks with his Keyblade, solid, speedy aerials and reliable KO moves in his forward smash, up smash, forward aerial, back aerial, and Command Deck (when using Fire or Thunder). Sora has a great air game, with a fast air speed, long range in his aerials and little start up and ending lag in most of his aerial attacks. He is one of the best edgeguarders in the game, and breaking his own guard is difficult. He also has a good projectile in Strike Raid, as it can rack up damage and sends the opponent towards him, making it useful as a combo starter or extender. Additionally, Aerial Recovery sports impressive maneuverability and does not leave Sora helpless, allowing for varied follow-ups, and his recovery is long-distanced, as it is supported by his versatile Flowmotion, which travels a long horizontal distance and can be slightly angled upwards and downwards. When Flowmotion is angled downwards near the ground, it also gives him a long pseudo wavedash known as Flowdash, and using Fire or Blizzard with the Command Deck slows down his descent. Combined with a fast air speed, a decent running speed, and a disjointed range, he has a good approach, and his neutral aerial can be used to cross-up shields if used well.

However, Sora has slightly below average weight, and combined with his floatiness, this makes him easier to KO vertically and horizontally compared to a decent portion of the cast. Some of his recovery options leave him open while he is trying to get back to the stage, as Aerial Recovery covers an unimpressive vertical distance despite its maneuverability and lacks hitboxes to protect him, and Flowmotion covers minimal vertical height when angled upwards and leaves him helpless if it doesn't hit anyone. This means that while his recovery can be extended and covers a long distance, he can have issues in coming back to the stage if he has lost his midair jump. He has low priority for a fighter with a disjointed sword, and his attacks are often fairly weak on their own, relying on his strong combo ability to rack up damage and secure KOs. Some of his KO moves have fairly weak KO potential, such as his up smash, or need good positioning, such as Thunder.

Sora appears to have a low player base and lackluster representation in online tournaments. His tournament placings fluctuate, but are generally low and his results are incredibly inconsistent when compared to other characters.

Sora is a medium-weight character heavily focused on racking damage and combos. His strongest aspect is his air game, which is where his combo ability shines the most, as his aerials have good range and priority. His neutral aerial is a fast combo extender or starter, as players can keep Sora's forward momentum on hit due to each hit giving him a slight upward boost. Forward aerial is a fast and reliable KO option which can be set up into from most of his aerials, and while his back aerial can do the same slightly earlier, it does have some startup. Finally, his up and down aerials can serve as viable combo extenders due to their vertical launch angle and low knockback, further compounded by the vertical boost they provide on hit. Sora's fast aerials, in addition to his fast air speed, also give him a spectacular edgeguarding game, which opponents may have trouble breaking through.

This impressive air game is also mirrored in his ground game. He sports good ground mobility, allowing him to chase down his victims to start or extend combos reliably. His neutral attack is very quick, and has an above-average damage output, in addition to the first and second hit being capable of locking. All of his tilts serve as reliable combo starters due to their low knockback, vertical launch angles, and low ending lag. His most reliable KO moves are his forward smash and up smash, with the former having good range and strong knockback, and the latter is a good anti-air option due to its vertical range and can deal a large amount of damage, allowing Sora access to reliable finishers. His grab game also sports decent utility, as his forward throw can set up a tech-chase situation or edgeguard due to its horizontal launch angle, while his up and down throws can set up combos, with the former being able to chain-grab fast-fallers and high-fallers, and back throw is his strongest throw and can set-up an edgeguard.

His special moveset is also very versatile. Strike Raid is a projectile and is a good damage-racking tool because of its duration, and this can also turn it into a good edgeguarding tool. In addition, its hitboxes send the opponent towards Sora, allowing it to extend combos. Flowmotion can allow different attacks depending on the directional input, and like the rest of his attacks, is a good damage-racking tool. Command Deck is very useful as well: Blizzard can be used to freeze enemies for a short time, denying approaches; Thunder is an excellent anti-air move and can KO at high percents, and Fire is useful for its KO ability and covers Sora's entire body, like his down smash. Additionally, Aerial Recovery sports impressive maneuverability and does not leave Sora helpless, allowing him to extend his already-lengthy combo strings or extend his recovery with Flowmotion.

However, due to Sora's below average weight, and below average accelerated falling speed, he is easier to KO vertically and horizontally than a good amount of the cast, giving him mediocre endurance. Additionally, he lacks reliable ways to deal with projectiles despite having a projectile himself, as his main options are slow or require him to be on the ground, which gives him trouble breaking through fighters with a camping-heavy playstyle.

Arguably, his most crippling flaw is his over reliance on damage strings to rack up damage reliably; most of his attacks, including his aerials, have unimpressive damage outputs. While this does grant Sora his impressive combo game, it forces him to perform lengthy strings of combos to rack up amounts of damage that most other characters could achieve in far fewer hits, which gives him difficulty in taking stocks. This is further exacerbated by Sora having only two aerial KO moves, in the form of his forward aerial and back aerial, and two reliable grounded KO moves, his forward smash and up smash, with the latter having mediocre KO potential despite its high damage output in comparison to the rest of his moveset and Command Deck can only KO at high percents while using Fire or Thunder, with the latter only hitting above and in front of Sora. As such, this can prove problematic if Sora goes against opponents who perform good DI, momentum canceling, or heavy characters like Donkey Kong. In addition, many of his grounded moves have punishable lag, which can leave Sora open to attack if he misses them, and all of his throws, while sporting good utility, cannot KO at reasonable percentages, with only his back throw doing so at very high percents.

His recovery options do grant him some control over his route, but leave him extremely open to gimping once he loses his double jump, further worsening his offstage survivability. Despite having a somewhat versatile recovery near the stage, once Sora is knocked far enough away from the stage with no midair jump, his chances of survival are very low, as Aerial Recovery, though it does not leave Sora helpless, is rather slow and does not grant a high vertical distance. Additionally, Flowmotion covers very minimal vertical height, even when angled upwards, has a very slow startup, does not ledge snap until the end of the move, has a very small edge grab range, and leaves Sora helpless when used in midair, in addition to being somewhat slow.

Overall, Sora is a combo-heavy character who sports a playstyle similar to Sheik in the official Super Smash Bros. games: the objective of his playstyle is to rack up damage quickly, and finish them off when he gets an opening. However, his mediocre recovery, low weight, and overreliance on lengthy combo strings to rack up damage hold him back from the higher tiers, keeping him as a mid-tier character.

In the latest version, Sora was mostly buffed. Below is a summary of the changes to Sora in demo 1.1:

Sora's first art, used in the character selection screen from v0.6 to v0.8b. 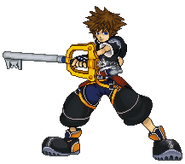 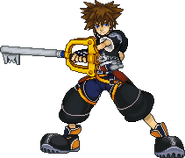 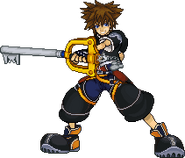 Sora using his down tilt on Palutena's Shrine.

Sora attacking Falco with his forward throw on WarioWare, Inc..

Sora running alongside Naruto on Lake of Rage.

Sora at a knockdown state, while Bowser taunts off-screen.

A stunned Sora on Sky Pillar.

Sora and Kirby about to use Strike Raid on The World That Never Was.

Two Soras next to each other on Devil's Machine.

Sora taunting, while Peach and Zelda standing on Palutena's Shrine.

Sora being affected by poison, close to Black Mage and White Mage on Sky Pillar.

Two Soras using Command Deck on The World That Never Was.

Sora in the SSF2 Beta intro.

Sora with Donald Duck and Goofy, as seen from Sora's resprite trailer.