This article is about Sonic's appearance in Super Smash Flash 2. For general information about the character, see Sonic the Hedgehog.

Sonic is a veteran starter character in Super Smash Flash 2. Unlike the Super Smash Bros. games, he is not the only representative of the Sonic franchise, he is joined by his sidekick, Tails. Sonic's sprites are custom-made and based on his appearance in Super Smash Bros. for Nintendo 3DS and Wii U. His voice clips are directly taken from Super Smash Bros. Brawl and Sonic Unleashed. His moveset is a combination of his SSB4 and Project M movesets.

Sonic is currently ranked 18th out of 47 on the tier list, placing him in the A tier. He appears to have a decent playerbase but lackluster representation in online tournaments. Normally, he places low to mid in tournaments that his players participate in.

Sonic is a middleweight who has outstanding mobility like in his home series. He unsurprisingly has the fastest dashing speed and among the fastest walking and air speeds in the game. With his above-average falling speed, Sonic can travel across the stage at a blinding speed despite his average gravity and slow air acceleration. Additionally, these traits make him able to easily and effectively utilize a rushdown playstyle.

Sonic's neutral attack, tilts, and throws deals decent damage and has minimal lag, making them hard to punish. His grab game is average, it is fairly easy to land thanks to his speed. Sonic's pummel is quick, allowing him to rack up a fair amount of damage before throwing an opponent. Up throw is a reliable combo starter and can chaingrab fast fallers. It has decently damaging combos beginning at 0%, as well as Spring Jump follow-ups beginning at medium percentages. It also has KO potential, although it KOs reliably at very high percentages. Down throw sends opponents at a low angle with high base knockback, which makes it excellent for starting combos and tech-chases. Back throw moves Sonic backward, which makes it useful for setting up for immediate edgeguarding. It also has KO potential due to its high base knockback, especially if it is used near the edge. Lastly, forward throw is his least useful throw, as its main purpose is for forcing the opponent away from him.

Sonic also has a strong air game. Neutral aerial is a great combo starter because of its low landing lag and launching angle. Up aerial has KO potential near the upper blast line and is great for combos, while its minimal lag makes it deceptively safe. Forward aerial is useful for starting and finishing combos thanks to its sourspot's launching angle and its sweetspot being a meteor smash. In certain instances, its sourspot can combo into itself at low percentages thanks to Sonic's fast air speed. Back aerial's clean hitbox is strong, making it one of his few reliable KO options like his up aerial and forward aerial. Lastly, down aerial is a stall-then-fall, it is Sonic's least effective aerial but it lacks startup, can be useful for combos, and its clean hitbox can meteor smash.

Sonic has useful special moves. Homing Attack deals consistent damage and homes in on the nearest opponent, making it useful for punishing missed or laggy attacks and breaking edgeguards. Spin Dash allows him to not only move across the stage but also deal damage upon contact. It hits multiple times and moves faster than his dashing speed, making it a reliable alternative to dashing. Jumping out of Spin Dash allows Sonic to hop while spinning, making him a jumping hitbox for a brief moment. It also gives him additional protection while chaining into other attacks and recovering. The mobility of the move combined with Sonic's already impressive speed makes him capable of racking up more damage in a short amount of time, and can clank and cancel out certain moves like Mario's fireball. Light Dash is one of Sonic's most reliable KO options, especially when sweetspotted. It can also be used as a recovery move to grab the ledge. Spring Jump is a useful recovery that goes very high and is one of the few recovery moves that does not cause helplessness, enabling Sonic to attack and dodge during his descent. The spring that is dropped can be useful both onstage and offstage by allowing him to pressure and gimp opponents, respectively.

Mastering Sonic's speed is important to perform at higher skill levels. Sonic players often take advantage of a variety of dash-related techniques like dash-dancing and dash canceling, which can be used for mind games during gameplay. Players also run away in one direction and then quickly turn back around to bait opponents or to avoid them altogether rather than roll-dodging. This allows the player to not be as easily punished and instead be able to punish their opponent's mistakes. In general, Sonic can often win neutral due to his speed and maneuverability onstage with fast attacks that can be used to approach with.

However, Sonic has some weaknesses. His KO potential is held back by his most reliable KO options (forward smash, down smash, forward aerial, back aerial, up aerial, and Light Dash), requiring good positioning and having noticeable startup and ending lag. While Sonic's ability to quickly rack up damage is respectable, he struggles to KO, which often results in opponents living up to very high percentages. He may also struggle to land due to his slow air acceleration, leaving him vulnerable to juggling. Sonic can also have difficulty dealing with camping and projectiles since they can severely limit his movement options. Some of his attacks are also punishable, which allow openings for opponents to punish when missed. His recovery can be predictable because of how linear it is with Spring Jump being his only vertical recovery option. Although Light Dash can be used for reads, using it in mid-air puts Sonic in a helpless state until he lands, leaving him temporarily vulnerable to punishes and self-destructs when used recklessly.

Overall, Sonic has strong neutral and offensive play with the potential to rapidly damage his opponents. But like other characters of his archetype, he has trouble KOing often.

Sonic has received a mix of buffs and nerfs, but he was mostly buffed overall. He has gained a lot from his moveset based on his appearance in SSB4 and Project M. Changes to his moveset and the knockback in some of his moves gives him better combo ability and more KO options. Additionally, his recovery and edgeguarding ability are also better, improving his neutral game. These changes allows him to compete against the roster better. However, the range and KO options in some of his moves has been nerfed. Despite the nerfs he was given, he has great mobility and approaching options, good recovery, and good edgeguarding game. 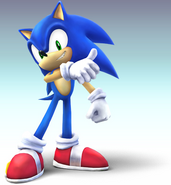 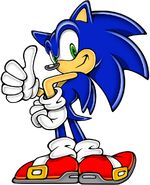 Sonic and Tails running towards Mario and Luigi, who are jumping on Final Destination.

Sonic hanging on the ledge while Sora is grabbing on Lake of Rage.

Sonic crouching while Black Mage tries to hit him with his down aerial on Lunar Core.

Sonic and Captain Falcon running on the track of Sand Ocean. 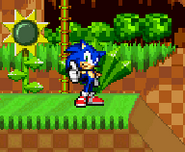 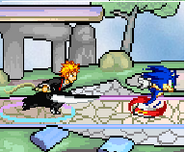 Sonic running away as Ichigo chases him on Battlefield. 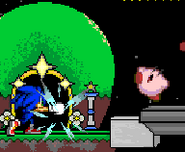 Sonic hitting Kirby with his forward smash on Comet Observatory. 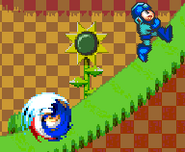 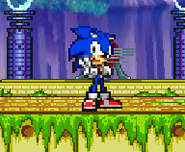 Sonic using Spring Jump with Mario above him on Temple.

Sonic and Captain Falcon running on the track of Sand Ocean.

Sonic and Tails from 'Reach for the Stars' Trailer.

Sonic and Tails from 'Reach for the Stars' (Sonic 30th Remastered) Trailer.