Snorlax, known in Japan as Kabigon (カビゴン) is a Normal-Type Pokémon. It evolves from Munchlax when leveled up with high friendship. In Super Smash Flash 2, Snorlax appears one of the multiple Pokémon that can be released from a Poké Ball to aid the player.

Snorlax is a huge, bipedal, dark blue-green Pokémon with a cream-colored face, belly, and feet. Its body is composed of mostly its belly, where most of its fat reserves accumulate. Its head is large, with small, pointed ears and two sharp teeth protruding from its lower jaw. It has large, hind feet with three claws and a circular brown paw pad, and its arms and five foreclaws are short.

Snorlax is often found in mountains and forests. It wakes up only to eat and seldom for exercises. It is not a picky eater, as its strong stomach allows it to eat even moldy food without feeling any ill effects. When hungry, it is not satisfied until it consumes 400 kilograms of food. Snorlax is docile enough to let children and small Pokémon bounce on its large stomach.

As stated above, Snorlax appears as one of the many Pokémon that can be released from a Poké Ball in Super Smash Flash 2. When released, Snorlax will pause then jump off the top of the screen. A few seconds later it will reappear, using Body Slam, to come crashing down on opponents dealing high damage and upwards knockback.

Snorlax jumps out of the stage on World Tournament. 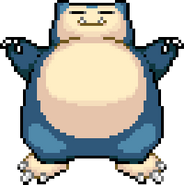 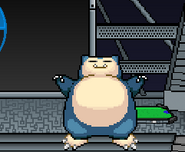 Snorlax after it is released from a Poké Ball on Pokémon Stadium 3.