A smash attack (スマッシュ攻撃) is a more powerful version of a tilt attack in Super Smash Flash 2. It also has up, forward, and down variations. A smash attack is performed by tapping a directional button at the same time as the standard attack button. Smash attacks can be charged up, and are usually very powerful, making them at times the most viable option for KO's, although some are ineffective in the case, having to be followed with edgeguarding. 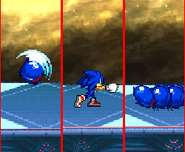 Sonic performing the three smash attacks in an older build. Taken from the old DOJO.
Add a photo to this gallery
Retrieved from "https://mcleodgaming.fandom.com/wiki/Smash_attack?oldid=170744"
Community content is available under CC-BY-SA unless otherwise noted.