The Smash Ball (スマッシュボール) is an item first introduced in Super Smash Bros. Brawl, that also appears in Super Smash Flash 2. This item floats all over the stage for a certain time unless it floats away or a character breaks it by attacking it. When broken, a colorful aura flame starts burning on the character, and their neutral special move is replaced with a single use of their more powerful Final Smash when used.

If a character takes enough damage or is hit by a strong attack while in standby mode, there is a chance that they may lose the Smash Ball, which then begins to move about the screen again. Any projectile can aid in collecting it. The Smash Ball moves around on its own, making it harder for players to use; but most of the time it remains static so players can attack it.

The camera treats Smash Balls the same way that it treats characters. Smash Balls do not vanish by being forced off the stage like other items, so a Smash Ball sent off the screen can pull the camera away from the characters. If no one breaks the Smash Ball after a long enough period of time, it flies away and/or disappears.

The Smash Ball next to Sandbag on Final Destination.

The Smash Ball being attacked by Sonic's back aerial on Nintendo 3DS.

The Smash Ball about to be hit by Bandana Dee's side special move on Dracula's Castle.

The Smash Ball's animation for the second early design. 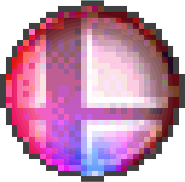 The Smash Ball on Test Stage 1. Notice how it is not floating.

The Smash Ball near Mega Man, Kirby and Sora.

The Smash Ball being hit by Mega Man's back aerial.

The Smash Ball's standby effect covering Sonic, who is performing one of his idle poses.

The Smash Ball floating near Link, who has used his up special move.