This article is about the general ability of shielding. For Link's mechanic during his idling and crouching animations, see Shield (Link).

Shielding is an action in Super Smash Flash 2 performed by pressing the shield button, causing a bubble of energy to surround the character. Shielding renders the character invincible to all attacks except grabs and certain unblockable moves. During its first active frame, it can reflect projectiles. During a shield, pressing sideways will cause the player to perform a rolling dodge, and pressing downwards will cause them to sidestep. Attempting to shield midair will result in an air dodge.

The bubble shrinks the more it gets hit and the longer the player shields. If the player shields for too long, or if the opponent hits the shield enough to destroy it, the bubble will break and the character will perform a shield jump, in which they will be knocked into the air and stunned for a short period of time, or until receiving knockback.

The color of a shield depends on the player shielding. For computer players, shields are always gray in color. For player-controlled characters, shields are normally red, blue, yellow, and green for players one, two, three and four respectively, and in Team Battle, shields are colored after the player's team color.

Yoshi has a unique shield that works differently in comparison to the normal shield. Instead of a bubble, he completely surrounds himself in an egg. The egg does not shrink, but instead darkens from white to dark red. Due to this property, Yoshi is immune to shield stabbing, as his shield will always completely envelop him.

Krystal's shield works very similarly to Yoshi's, in that she creates a bright force field that completely surrounds herself. The force field does not shrink, but instead darkens overtime. Like with Yoshi's shield, this makes Krystal immune to shield stabbing.

Jigglypuff has a large shield compared to its body, which shrinks at a slower rate than other characters' shields. However, if its shield is broken, the force of the knockback will send Jigglypuff soaring into the air and, without a ceiling, cause it to be Star KO'ed.

A shield grab is the act of grabbing while shielding. It is used to punish attacks when they are blocked because the attacker will be caught in the lag of their attacks and the defender's grab can connect with little trouble. Shield grabs allow a character to get around the delay of dropping the shield.

Input-wise, grabbing is the same as shielding and attacking at the same time, so shield grabs can also be done just by pushing the attack input while shielding, instead of pressing the grab button.

Running shield, not to be confused with the dashing shield, is a technique that is performed by shielding while running, which makes the shielding character slide a short distance, which varies according to each character's running speed. Sliding versions of out-of-shield techniques can come from this, such as a dashing shield grab.

Shield dropping, also known as Shield Platform Dropping, is the act of dropping through a platform while shielding. To do it, the player must use shield, hold walk button, and press down on peripheral.

Shield SDI, or Shield DI, is a technique that allows you to move your shield in any *horizontal* direction during shield hitstun. Using the C-stick (direction+A) left or right will make the shield move. Keep in mind that shield SDI may not move the shield as far or even not move the shield at all, but when it works, it can be used to escape shield break combos, move out of multi-hits, and more.

A shield poke, also known as a shield stab, is the event of finding a damageable portion of a character slightly outside of their shield and striking it bypassing their attempt to shield. This is a useful technique because it can used to strike an otherwise defended enemy.

Some characters are easier to shield stab then others. Captain Falcon and Samus are too tall for a spherical bubble to cover properly, while characters who are too short or round such as Kirby and Jigglypuff are hard to shield stab for similar reasons.

Some moves are more suited for shield poking than others. Multi-hit moves like the Mach Tornado when used at their maximum range can deplete a shield with the first few hits and then hit the opponent on the next few. The hitbox shape of a move also affects its shield stabbing viability; for instance, Meta Knight's down tilt hits very low to the ground, and it could hit the opponent's uncovered feet without touching their shield center.

As mentioned above, due to Yoshi's and Krystal's unique shields, they cannot be normally shield stabbed.

Shield hitstun, also known as simply shield stun, is the effect a character experiences when their shield is hit and they begin to slide. During this time, the shielding player will not be able to do anything. This ends up becoming a problem when the opponent consistently hits a player's shield, creating shield pressure. The shielding player will be unable to react or prevent the opponent from breaking their shield. As percent increases, when a shield is hit the shield will slide farther across the ground.

This mechanic allows for shield SDI 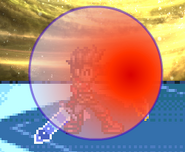 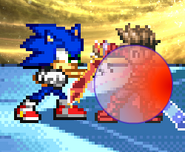 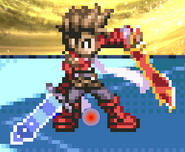 Lloyd shielding while his shield health is low. 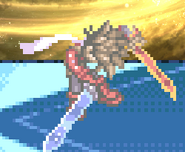 Lloyd getting stunned after a shield break. 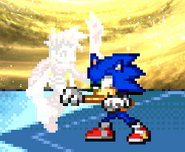 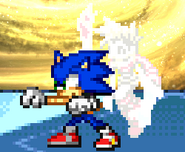 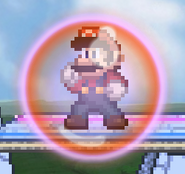