When performed, Naruto summons a Shadow Clone beneath himself, which he uses as a stepping stool to jump upwards while performing a reverse-gripped kunai slash outwards. Opponents hit by the kunai as it is swung are dealt 12% slash damage and moderate knockback. In addition, if the special move input is pressed as Naruto is ascending, Naruto will then stop his momentum completely and perform a kick that deals 7% damage and strong knockback.

After initially leaping off of the Shadow Clone, it then plummets directly downward and lies on its back if it lands on a platform. If an opponent makes contact with it at any point, it will deal 6% damage and paralyze them for a moment. No knockback is dealt when the clone is lying on the ground, but if it hits an opponent in the air, the opponent will be weakly meteor smashed. The clone disappears after a period of time, when touched by an opponent, or if Naruto uses the move again.

Offensively, the move is very useful; it has very little lag, the kick is a strong move to finish combos with, and the Shadow Clone can be used as a trap for opponents when on the ground. However, the clone has very little priority, as it can be destroyed by most attacks. Also, as the clone is a projectile, it can be reflected by moves with this property to deal damage to Naruto, should he make contact with it. In terms of recovery, the move is not very effective, as not only does it leave Naruto helpless afterward, but it also sends him only a relatively short distance upwards and at a predictable trajectory forwards, leaving him open to be punished while recovering. This is further hampered by the kick that, if performed, cancels his momentum and prevents him from recovering further.

This move, alongside Shadow Clone Toss and Shadow Clone Summon, requires Naruto Uzumaki to use the Shadow Clone Jutsu (影分身の術), a technique in the Naruto franchise which creates clones of the user. However, these clones are actual copies, not illusions. The user's chakra is evenly distributed among every clone, giving each clone an equal fraction of the user's overall power. The clones are capable of performing techniques on their own and can even bleed, but will usually disperse after one or two solid blows, though even then it may not be enough, as evident when during the Fourth Shinobi World War a few more notable clones of Naruto took heavy hits but did not disperse. The clones can also disperse on their own. The clones will be created in roughly the same condition as the original.

This technique is also known as one of Naruto's best Jutsus, since he can use it to multiply not only himself but also his attacks, as seen with the Rasengan and its many variations, which, combined with this technique, can deal extremely massive damage.

This move also makes use of the kunai (クナイ), one of the most basic and common ninja tools in Naruto. It is a black dagger about the length of one's hand with a handle wrapped in bandages and a small ring attached to the end of it. The kunai can be used for close combat, like a normal knife; it is designed for thrusting and stabbing, though it can still do some damage if thrown or slashed despite not being designed for these. Kunai can also be kept on spring-loaded wires up the user's sleeve, much like Naruto appears to do in SSF2.

Naruto summoning the Shadow Clone to initiate the move, on Final Valley.

Naruto kicking Falco away at the end of the move.

The Shadow Clone on the ground.

The smoke effect of Falco touching a Shadow Clone.

Naruto uses kunai at Mega Man, on Planet Namek.
Add a photo to this gallery 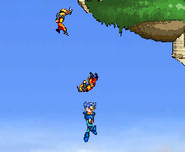 The early design of the move's clone about to cancel Mega Man's Beat Call.

The first early design of Naruto summoning the Shadow Clone.

The second early design of Naruto summoning the Shadow Clone.

The early smoke effect of Black Mage touching a Shadow Clone.
Add a photo to this gallery

Retrieved from "https://mcleodgaming.fandom.com/wiki/Shadow_Clone_Slash?oldid=158893"
Community content is available under CC-BY-SA unless otherwise noted.