Saturn Valley consists of a grassy, elevated plain with a dip in the center. There are two houses, one on each side of the stage, and each has a wooden roof that acts as a platform. In addition, there is a Hot Spring in the center of the stage that, when hazards are turned on, will gradually heal players who stand in it. There is a slope leading off the plateau, but it is merely part of the foreground and cannot be used. The background also features various Mr. Saturns watching the fight.

This stage is currently banned in competitive play. With its redesign in Beta, it was initially considered a counterpick or even a neutral stage, but it has since been banned due to its exceedingly large size being too advantageous for projectile-based characters and allowing for camping. The slopes in the center of the stage are also problematic, as characters launched from the center of the stage can often bounce off of them or immediately tech on them.

Saturn Valley is a village in the EarthBound games and it is home to most Mr. Saturn creatures. In EarthBound, Ness and his friends must go through it in order to reach the third "Your Sanctuary" location, and is also located near Master Belch's base at Grapefruit Falls, where many Mr. Saturns are being held hostage. The valley is also the last place where Ness and friends visit in the present-day, before using the Phase Distorter 3 to travel to The Cave of the Past.

One of the notable points of interest in Saturn Valley is one of two Hot Springs in the game, which can heal Ness and his friends for no cost. It functions the same way in SSF2, where players can stand in it with no risk to gradually heal damage.

Mario and Peach on a Hot Spring. 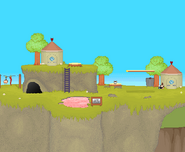 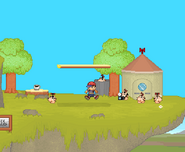 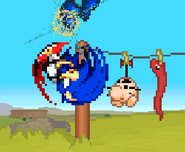 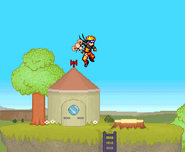 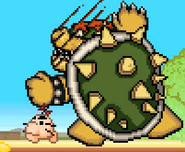 Ness using his back throw on Fox.

Ness next to Mr. Saturn and Rope Snake.