When picked up, the player can use the Ray Gun to shoot 16 laser bullets which deal 5% of damage per shot, so if the user hits one target with all the shots, they will deal up to 80%. The laser bullets are not very powerful. They are more of damage rackers, and they have limited range. Once all the laser bullets are used up, it only remains to dispose the Ray Gun, as further attempting to shoot with it will produce a clicking noise with no bullet shot. The player can throw it towards opponents for an additional 9% of damage.

Ray Gun next to Ness on Krazoa Palace. 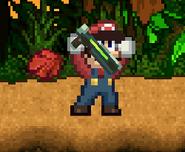 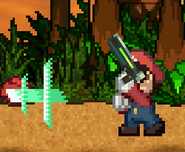 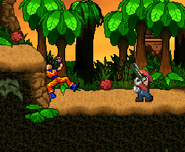 Goku being hit by the Ray Gun from Mario. 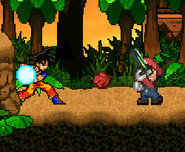 Goku about to uses Kamehameha at Mario with a Ray Gun. 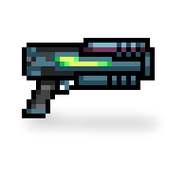 Captain Falcon next to the Ray Gun on Meteo Campaigns.

Meta Knight being shot off stage.