Rasengan Smash was planned to be Naruto's down special move in Super Smash Flash 2, before it was replaced with Shadow Clone Summon. The move was made into his down smash instead, but it was removed and replaced in demo v0.5b with a split attack for unknown reasons.

When performed, Naruto would have charged a Rasengan and then smashed the ground with it, sending a blast of energy upwards. The closer opponents were to the move when it would have been performed, the more damage it would have dealt. Other details of this special move are unknown, as it was scrapped before it could be included as a down special move in any release of SSF2.

As a down smash, it would act very similarly to how it was intended to act as a special move. It would deal between 16% and 22% damage with low knockback, depending on the charge. However, it would deal the same amount of damage no matter how close the opponents were.

The Rasengan is Naruto's signature technique in the Naruto manga and anime. It is a powerful A-rank technique invented by the Fourth Hokage, Minato Namikaze, which he created by observing the Tailed Beast Ball. Minato spent three years developing the Rasengan; his plan was to take the shape transformation of one's chakra to the "highest possible point" and then combine it with his chakra's nature affinity, creating a technique that did not need the aid of time-consuming hand seals to control. He died before he could accomplish this, but on shape transformation alone, the Rasengan is still a very useful, powerful, versatile, and difficult technique to learn and master.

This specific move originates from a similarly named attack in the Naruto Shippuden: Ultimate Ninja Storm series in which Naruto would perform the Rasengan and drive it downwards, much like it worked in SSF2. 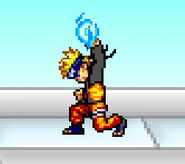 Naruto using Rasengan Smash as a down smash on Final Destination.
Community content is available under CC-BY-SA unless otherwise noted.
Advertisement