McLeodGaming Wiki
Register
Don't have an account?
Sign In
Advertisement
in: Articles nominated to be featured, Attacks, Special moves,
and 6 more

When performed, Naruto summons a Shadow Clone, and builds up a ball of spinning chakra in his hand. When the special move button is pressed again, Naruto thrusts the chakra ball forward. If the ball hits an opponent, it slowly moves forward, trapping opponents inside and dealing multiple hits, finishing the sequence with a stronger hit that launches opponents.

The move can be charged to deal more damage, and the energy balls have two stages before their fully charged version, with the lesser charged version being weaker and smaller than the other. If the player tries to move left or right while Naruto is charging Rasengan, he will store the charge and roll, allowing him to evade enemy attacks and continue charging Rasengan. Aside from being fully charged, the attack deals anywhere from 10% to 14% damage to the opponent if all the hits connect, with moderate knockback at the end.

Fūton: Rasenshuriken (風遁・螺旋手裏剣), also known as Wind Release: Rasensuriken or simply Rasenshuriken, is Naruto's fully charged version of Rasengan in Super Smash Flash 2. Instead of hurling the chakra forward as a ball, Naruto instead throws the chakra, now in the shape of a fūma shuriken. The projectile has decent range and flies horizontally, exploding after its travel.

Much like with the standard Rasengan, opponents hit by the move are trapped for the move's duration and dealt up to 23% damage, assuming all hits connect. Additionally, if an opponent is close enough to Naruto when he activates the move, they will be paralyzed for a moment and take an additional 3% damage, as well as the full force of the projectile when it gets thrown.

Ōdama Rasengan (大玉螺旋丸), also known as Big Ball Rasengan and Great Ball Rasengan, was Rasengan's fully charged variation in Super Smash Flash 2 prior to demo v0.8a. This attack involved Naruto's chakra sphere expanding upon contact with an opponent to a much larger one, with a massive, lasting hitbox.

The initial small ball of energy had three hitboxes: two clean hits, with enemies close to Naruto's arm getting 28% damage, and opponents far from it receiving 25% damage; as well as a late hit, which dealt 16% damage. After the ball expanded, it would start inflicting an uniform 25% damage. All hitboxes had an enormous amount of knockback and a very high amount of freeze frames.

In Beta 1.2, the move was reimplemented as part of Naruto's Tailed Beast Rush, where Naruto uses the Ōdama Rasengan at the very end of the Final Smash, in order to launch foes away.

The Rasengan is Naruto's signature technique in the Naruto manga and anime. It is a powerful A-rank technique invented by Minato Namikaze after observing the Bijū Dama. Minato spent three years developing the Rasengan, and planned to take his chakra shape transformation to the "highest possible point", and then combine it with his chakra's nature transformations, thus creating a technique that does not require time-consuming hand seals in order to be controlled. He died before he could accomplish any of this, however.

The Rasengan relies on the chakra control of the user. In Naruto's case, he uses a Shadow Clone to help with shaping the chakra into a sphere, similarly to how he does in SSF2. The compacted nature and moving speed of the chakra allows the Rasengan to grind into anything it comes in contact with, to inflict major damage. This tends to launch the target backwards after hitting them, or form a crater when touching the ground.

The trapping effect the Rasengan has in SSF2 could be a reference to the Clash of Ninja series, where the Rasengan would trap and damage the opponent multiple times in succession.

The Rasenshuriken requires a great deal of chakra to perform. If he attempts to attack with the Rasenshuriken similarly to how he attacks with Rasengan, his arm ends up suffering severe damage.

After travelling a certain distance or colliding with a target that it cannot slice through, the central sphere of the Rasenshuriken detonates, producing a vortex of wind in the immediate area. Within this vortex, countless microscopic wind blades are created, which damage anything within the vortex at a cellular level and prevent any medical ninjutsu from healing said damage. Tsunade, the leader of Naruto's home village, likens the injuries to poison, and warns that those affected by the Rasenshuriken multiple times may not be able to use jutsu ever again.

Naruto created the Ōdama Rasengan during his two-and-a-half years of training with Jiraiya; while training to break out of a genjutsu, Naruto accidentally released his chakra and created a huge Rasengan. It utilizes the same concept of compressing spinning chakra in one's palm as the original Rasengan, albeit the amount of chakra involved is much larger. Due to the chakra sphere being extraordinarily compact, all of its energy ends up released on contact with a foe, thus enhancing its destructive abilities, far beyond the Rasengan's.

Kirby's version of the move being charged.

Naruto charging the earliest version of the Rasengan.

The second early design of the Rasengan being charged.

The third early design of Rasengan being charged.

The first early design of Rasengan being hurled forward.

The second early design of a low-charged Rasengan.

The second early design of a half-charged Rasengan.

The Shadow Clones in Rasenshuriken's first and second early designs. 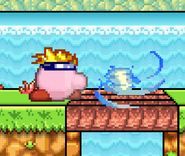 Kirby's version of the Ōdama Rasengan.