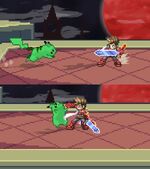 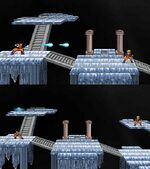 Lloyd grabbing Pikachu from a great distance (left), and the difference in range between some projectiles (right).

For instance, Ichigo's attacks have good range, as the length of his sword can hit opponents from a distance, leaving Ichigo in a safe position. On the other hand, many grabs have poor range; the user must get very close to the opponent for it to connect, which might be risky, especially when trying to approach camping characters. There are attacks that are considered to have "long" range when it is actually a character rushing ahead to attack. An example would be Jigglypuff's forward smash. Attacks with disjointed hitboxes generally have more range. Projectiles in general have very long range.

This article is a stub. You can help McLeodGaming Wiki by expanding it.

Retrieved from "https://mcleodgaming.fandom.com/wiki/Range?oldid=173218"
Community content is available under CC-BY-SA unless otherwise noted.