Proto Man, known in Japan as Blues (ブルース), is the first Robot Master created by Dr. Light and is the older brother of Mega Man. Proto Man appears in Mega Man 3 as an enemy, but he saves Mega Man at the end. The brothers have also become rivals. He appears in Super Smash Flash 2 as an Assist Trophy.

Proto Man is a mysterious character who always has a dark visor, so it is unknown what color his eyes are or how they look. His colors are in contrast Mega Man: his suit is white or light gray and has a red belt. Additionally, his boots, gloves, Proto Buster, and Proto Shield are red with grey details. His helmet is red with a white arrow just above a dark visor covering his eyes, and he wears a yellow scarf around his neck. Proto Man is armed with his Proto Buster and his Proto Shield, and much like Mega Man, he uses a variety of weapons and adapters, but they only use their own weapons in SSF2.

When summoned, Proto Man will perform his whistle before appearing in front of an opponent. Proto Man then assaults the summoner's foe(s) using four different methods of attack. One attack he performs is dashing back and forth on a platform while ramming opponents with his Proto Shield. He also attacks by rapidly firing yellow-colored shots from his Proto Buster. When Proto Man's target is in the air or on a platform above him, he will leap upward and fire a quick series of shots in a progressively downward direction. This move also allows Proto Man to move to different platforms in the stage. Proto Man's last and most powerful attack is his green-colored charged shot known as the Big Bang Blast. 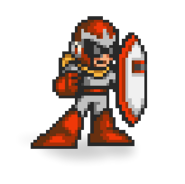