The Poison Mushroom (毒キノコ) is an uncommon harmful object from the Mario franchise and is also an item in Super Smash Flash 2. It is the polar opposite of the Super Mushroom.

The Poison Mushroom can be described as a penalty item for players that craved for a Super Mushroom. Instead, it can be distinguished from the latter as it has a duller coloration and sports angry-looking eyes. As the polar opposite of the Super Mushroom, any character who touches it will shrink in size, becoming smaller for about 10 seconds.

This also grants the following effects:

The Poison Mushroom originates from the Famicom Disk System sequel to the original Super Mario Bros., Super Mario Bros.: The Lost Levels. In direct contrast to the Super Mushroom, the Poison Mushroom is harmful towards Mario and Luigi: touching one is equivalent to colliding with enemies or obstacles. Fire Mario/Fire Luigi or Super Mario/Super Luigi will shrink back to their Small forms, while touching one in said forms will make them lose a life. In SSF2, this is translated more like the first case, as the player is not KO'd by touching a Poison Mushroom but rather shrinks and becomes weaker, akin to turning back into Small Mario/Luigi.

In its original appearance, the Poison Mushroom shared the same palette as a Goomba, having a brown cap with black spots and a duller stem coloration when seen in the overworld; its appearance would change in the underground and castle levels of the game, but it still would show the same hazardous behavior nonetheless. In Super Mario All-Stars, the design of the Poison Mushroom would drastically change to a purple cap with a skull stamped on it, and angry-looking eyes. Because the Poison Mushroom is meant to be confused with the Super Mushroom in SSF2 in an attempt to deter players from only hunting down the latter, the design of the Poison Mushroom is purposely made more similar to the Super Mushroom's design, with only closer inspection serving as the only way to tell the Mushrooms apart.

Peach and Zelda crouching, surrounding a Mario taunting at Pichu after the latter was affected by Poison Mushroom on Hidden Leaf Village.

Yoshi crouching next to a stunned Lloyd after he was affected by a Poison Mushroom on Emerald Cave.
Add a photo to this gallery 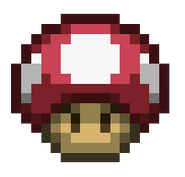 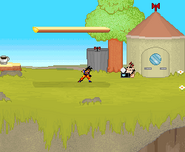 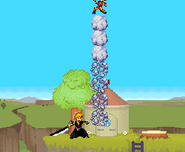 Ichigo using his up smash on a tiny Goku.

Mario, under the effects of the Poison Mushroom, getting hit by Donkey Kong's forward smash on Bowser's Castle.
Add a photo to this gallery

Retrieved from "https://mcleodgaming.fandom.com/wiki/Poison_Mushroom?oldid=172976"
Community content is available under CC-BY-SA unless otherwise noted.