The Pitfall (おとしあなのタネ) is an item from the Animal Crossing series appearing in Super Smash Flash 2.

When thrown, the Pitfall bounces off walls until it touches the ground, which it then embeds itself into with no trace, but will disappear with a puff of smoke after a few minutes. If an opponent walks into its location, they will get driven into the ground and taking 11% of damage, burying them and leaving them motionless and vulnerable to attacks if they are on a hard platform. If the opponent was on a pass-through platform, it will go clean through it and continue downwards. This also happens when the item is thrown at a grounded opponent. If it gets thrown in midair and hits an airborne opponent, it will get meteor smashed.

The Pitfall made its first appearance in Animal Crossing. In each game it appears in, the Pitfall is a somewhat rare item that can be found around town. It is used to pull "pranks" on other townsfolk by burying it and waiting for the animal to walk by. When the animal walks over it, it falls and gets temporarily stuck in that spot. The player could also fall into its own Pitfall.

PAC-MAN and Wario crouching near a Pitfall on Smashville.

Sora getting buried by the Pitfall from Naruto. 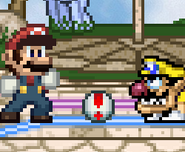 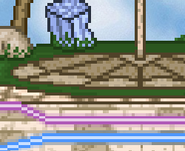 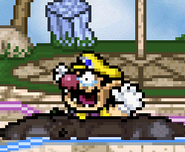 Wario getting buried by the Pitfall. 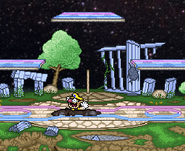 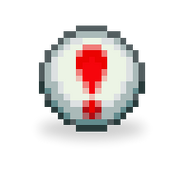 Goku with a pitfall dashing towards Fox on Hidden Leaf Village.

Fox trapped in a pitfall.

Goku using his down smash on the trapped Fox.

Fox hitting a wall after being hit by Goku's down smash.
Community content is available under CC-BY-SA unless otherwise noted.
Advertisement