This article is about Pikachu's appearance in Super Smash Flash 2. For general information about the character, see Pikachu.

Pikachu is a veteran starter character in Super Smash Flash 2. Pikachu had numerous sprite changes during early development but the final design used when he was finally incorporated into the game is completely custom-made and based on its appearance in Super Smash Bros. Brawl. Its voice clips and moveset are directly taken from the same game.

Pikachu is ranked 3rd of S tier. Pikachu posses quick attacks, decent combo ability, great recovery, and good finishers in its up smash, forward smash, back aerial, Thunder, and down aerial. Pikachu is a strong edge guarder, being considered one of the best edge guarders in the game.

However, Pikachu is light, which makes it easy to KO horizontally. It has poor reach in many of its attacks, forcing it to get up close to start combos (although this is remedied by its Thunder Jolt approaches). Although this gives Pikachu problems approaching characters with disjointed hitboxes, ex.: Lloyd and Sora. This also goes to its finishers as well, where Pikachu needs to be close to the opponent in order to secure a KO. Another problem Pikachu has is its poor combo game, where it mainly has to rely on strings that do not send opponents into enough hitstun.

Pikachu is a small, but fast and agile fighter. Pikachu has good mobility with having the sixth fastest dashing speed in the current demo and can perform Quick attack cancel to move around the battlefield, which gives Pikachu excellent approach options.

Pikachu has reliable KO moves in its forward smash, up smash, Thunder (when the bolt of lightning hits Pikachu it produces a shockwave that deals strong knockback), Skull Bash and its down aerial.

Pikachu has poor grab range, contested for the shortest grab in the current demo, Pikachu has a great grab game and throw game. Down throw is good for setting up combos, while also being an effective chain grab on fast and high fallers with being able to be followed up with an up smash at death percents. Forward throw is also good for setting up combos. Up throw is can chain grab Fox and being followed up by up smash on certain characters at death percents.

However, Pikachu suffers from poor range in the majority of its attacks which leaves it vulnerable to characters with disjointed hitboxes (ex. Marth and Meta Knight). Pikachu also has problems dealing with certain projectiles which is another approaching problem.

Despite Pikachu's light weight, it is an average faller and its wonky hurtbox makes it susceptible to combos. Pikachu's own combo game is below average due to its attacks sending the opponent into little hitstun to allow for more follow ups.

Pikachu was nerfed in the transition from 9b to Beta, with the changes to priority effectively taking away one of its strongest aspects. Pikachu's frame data was also nerfed in its tilts, making them harder to get follow ups with or throw out as much. Also, Pikachu went from having one of the strongest grab & throw games from thoughout various demos, to having one of the worst, due to it losing a chain grab, losing its follow ups from grabs and kill confirms. Pikachu, is still a solid fighter, but not as potent as it once was. 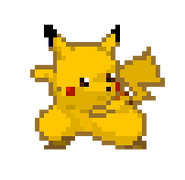 Pikachu's first artwork in the DOJO!!!. 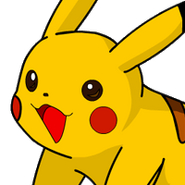 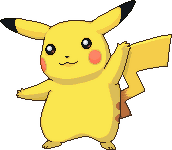 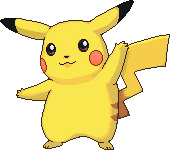 Pikachu and Jigglypuff on Lake of Rage. Notice the new alternate costumes.

Pikachu next to Pichu holding Firework on Yoshi's Island. 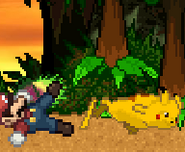 Pikachu taunting while Mario uses his down smash on Jungle Hijinx. 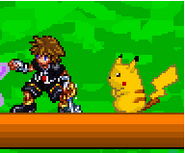 Pikachu standing next to Sora on Dream Land. 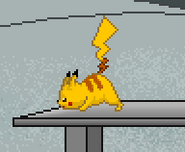 Pikachu being hit by Lloyd on Waiting Room.