McLeodGaming Wiki
Register
Don't have an account?
Sign In
Advertisement
in: Attacks, Special moves, Up special moves,
and 4 more

When performed, Ness bends over and shouts "PK Thunder!" as he summons a ball of electricity from his head that travels straight up. Once summoned, the player loses control of Ness as he stands still or descends slowly down, and pressing any directional input will instead guide the ball of electricity in any direction. Additionally, pressing the shield input cancels the move and allows Ness to move freely while the projectile flies straight away. The projectile will disappear on its own and end the move after a certain period of time, or after hitting an opponent or platform. If the projectile hits an opponent, it deals 8% electric damage with weak knockback to the side. It can deal an additional 8% damage if the opponent is hit as Ness initially uses the move, which does not cause it to disappear.

If the projectile is steered into Ness himself, he will use PK Thunder 2 (also called PK Rocket), which consists of him being launched in the direction opposite to where he is hit with electricity surrounding him, traveling a considerable distance, being left helpless after the move ends if he is in the air. Opponents that come into contact with Ness as he is using it are dealt 20% electric damage (25% if hit as he initially launches) with massive knockback. This is also his main recovery method, though aiming the projectile incorrectly can launch Ness in the wrong direction and lead to a self-destruct.

The move's description in EarthBound states that the user could miss the target and not cause any damage to the enemy. The difficulty of using PK Thunder in SSF2 could be a reference to how PK Thunder can sometimes miss enemies in EarthBound. The move's recovery properties are somewhat similar to Teleport α, where the party's speed is increased greatly, to the point of being difficult to control, and explode if they hit a solid object before covering sufficient ground to warp. 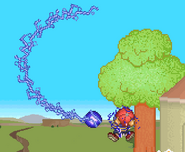 Ness about to use PK Thunder's first early design to hit himself with the ball of thunder. 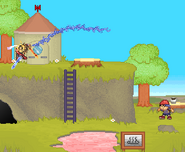 Ness hitting Lloyd with the ball of thunder during PK Thunder 1. 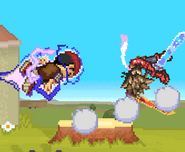 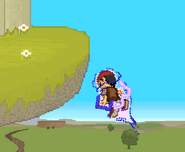 The projectile of PK Thunder being aimed on Saturn Valley.

Ness using PK Thunder in the air to hit himself with the projectile.