PAC-MAN is a veteran starter character in Super Smash Flash 2. He was initially revealed as a playable character on May 27, 2016, when videos and files from the game were leaked. He was officially confirmed on a special emergency Dev Blog, along with Pit, on May 29, 2016. His sprites are custom-made and, alongside with his moveset, based on his appearance in Super Smash Bros. for Nintendo 3DS and Wii U, which consists of references from PAC-MAN, PAC-LAND, and other NAMCO games.

PAC-MAN is ranked 14th in the B+ tier, making him an upper mid tier, ten places higher than he previously was, in 24th place. PAC-MAN's biggest strength is his stage control: he has very good projectiles in his Bonus Fruit and Fire Hydrant, which are very versatile, can create various intricate set-ups and can also KO at high percents. He has KO options in his smash attacks, Bonus Fruit (with the Apple or the Key), back throw, neutral aerial, and Power Pellet (when he eats the Power Pellet). PAC-MAN also has a fantastic recovery: both Pac-Jump and Power Pellet travel a long distance and the latter doesn't leave him helpless. However, some of his KO options (like neutral aerial) are unreliable or hard to land, and his special moves can be used against him, including hitting the hydrant. His grab is also very punishable if he misses. His mobility is only average at best, and his range is rather poor, and because of this, he struggles against fast characters like Captain Falcon or characters with disjoints, like Marth and Sora.

PAC-MAN currently places 14th in B+ tier in the tier list (as of version 1.1.0.1 of Beta), placing him in mid-low tier. PAC-MAN's special attacks are all very diverse and allow for different approaches and strategies. He has a unique projectile game with Bonus Fruit, which randomizes through 8 fruits, each with their own properties, and when combined with the Fruit Catching technique (pressing attack right after throwing the fruit to catch it), it gives PAC-MAN a considerable offensive game. PAC-MAN's Pac-Jump and Fire Hydrant give him many tricks when played with as they both have the ability to move opponents. PAC-MAN also has a chain grab & one of the best ledge traps in the game thanks to the fact he can combine Hydrant & Pac-Jump at any point (i.e. the ledge), making his edgeguarding game fantastic. PAC-MAN also has a fantastic out of shield game thanks to his neutral aerial, Pac-Jump, and his free usage of picked Fruits in Z-drops and throws

However, PAC-MAN has very notable flaws. His only consistent KO options are his raw smash attacks, Apple, Key, Hydrant, back throw, and neutral air. Some of these kill options are unreliable; the Apple only works at 130%~, the Key takes up a sizable time to charge, the Hydrant projectile can be used against him, and his neutral air has to hit at the start of the attack for it to have any KO potential at all. Following this, all of his special attacks can be used against him (Fruits can be intercepted mid-flight & Pac-Jump also may have PAC-MAN to plummet to his death if interrupted). PAC-MAN also has a situational grab despite it being better than Super Smash Bros. for Nintendo 3DS and Wii U due to quicker execution & more active frames (even beyond the beam at times), as it can be tediously slow at a distance, and its very high end lag makes it risky and easily punishable, which also makes his chain grab situational. He has a rather large hurtbox, and combined with how most of his non-special attacks extend slightly from his body, he is easily hit and maneuvered around with attacks.

PAC-MAN also has issues when being counterplayed by opponents who know how he works and his main gimmicks, which makes him rather inconsistent at tournaments. He also seems to struggle against most of the cast due to them being able to stop a lot of his traps from happening, rendering PAC-MAN as a less efficient character. PAC-MAN loses to a lot of faster characters who can rush him down easily & characters with disjoints due to his lack of them, making setups extremely hard.

PAC-MAN has a very small player-base due to how he requires a lot of tech-skill and is overall hard to play as. However, Kyoz has been shown to do very well with PAC-MAN along with causing a huge upset back in Gax Saga including taking out Gax himself (widely considered one of the best SSF2 Beta players as of right now). However, Kyoz has been mainly inactive outside of this. The only other notable PAC-MAN player is Playridise, but it has been pretty debated among certain players whether or not he deserves the title of second best PAC-MAN player due to his lack of consistent results as a PAC-MAN player.

PAC-MAN dodging at Bowser's forward smash with a Beam Rod on Dracula's Castle. 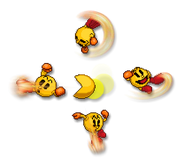