PAC-MAN (パックマン) was an Assist Trophy character in Super Smash Flash 2 who was somewhat unique, in the sense the summoner was able to control his movement pattern. When PAC-MAN was refurbished into a full-fledged playable character, he was subsequently removed from the Assist Trophy roster.

PAC-MAN's original design came when his creator Tōru Iwatani stated that the character's shape was inspired by a pizza missing a slice, however, he admitted in a 1986 interview that this was a half-truth and the character design also came from simplifying and rounding out the Japanese character for mouth, kuchi (口). The original artwork used to promote the arcade game roughly represented him as a round, yellow being with large black eyes, a small nose, orange gloves and red shoes. This, however, was not kept consistent with the North American release, where PAC-MAN's design was considerably changed to a small blob-like yellow being with round red eyes and large nude feet. With he passing of the time, PAC-MAN would remain in his original design for all the releases of his games, with some minor changes. PAC-MAN was trained to be the protector for his home land, PAC-LAND, from the ghost that plague it, aided by the Super Pellets that allows him to eat the ghosts. He is also a gluttonous person, eating large amounts of food, that, within his series, can be considered usually a distraction. He also has a family which includes his wife Mrs. PAC-MAN, his son PAC-MAN Jr. and his daughter Baby PAC-MAN.

PAC-MAN originally appeared in his classic 8-bit form from the arcade games that gave him popularity. He could be considered the only "playable" Assist Trophy character, as he could be controlled with the player's movement keys, and was the only Assist Trophy character to do so. PAC-MAN followed a straight path whenever a key was pressed. Characters did continue moving though, so they had be careful while using PAC-MAN.

PAC-MAN chomped the opponents he came into contact as if they were the ghosts from PAC-MAN (this after the sound effect that is heard when he chomped someone), dealing 16% of damage with greater knockback.

PAC-MAN after being summoned, on Casino Night Zone.

Lloyd controlling PAC-MAN, on Bomb Factory.
Add a photo to this gallery 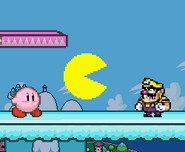 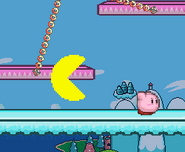 PAC-MAN following Kirby, who is dashing, on Yoshi's Island. 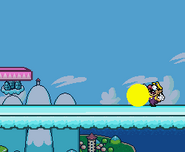 PAC-MAN chomping Wario on Yoshi's Island.
Add a photo to this gallery

Retrieved from "https://mcleodgaming.fandom.com/wiki/PAC-MAN_(Assist_Trophy)?oldid=157181"
Community content is available under CC-BY-SA unless otherwise noted.