This article is about Ness's appearance in Super Smash Flash 2. For general information about the character, see Ness.

Ness slightly fell to 25th, but stayed at B- tier. Ness possesses a strong aerial game, decent combo potential and strong finishers in his forward smash, a sweet spotted back aerial, up aerial, down aerial, PK Flash, PK Thunder 2, and his back throw. He has a solid projectile with PK Fire, and can deal with opponents' projectiles by reflecting them with forward smash or absorbing them with PSI Magnet. His aerial game is very potent due to his solid aerials and his ability to double jump cancel.

However, Ness suffers from an extremely predictable recovery that is very easy to gimp by either neutralizing the projectile or by hitting Ness into it at an undesirable angle. He has problems with range in many of his attacks and a slow movement speed, giving him a weak selection of approach options, which forces him to play defensively or risk losing the neutral. Due to his below average accelerated falling speed, he can be KO'ed vertically earlier than most characters.

Ness appears to have a small player base and poor representation in online tournaments. This is not surprising, given that Ness is one of the most vulnerable characters when taking lag into account. However, Nstinct and Appley, who are the two most notable Ness players, tend to place high in tournaments with him.

It is difficult to generalize Ness due to his diverse attributes. He has finishers in his forward smash, PK Flash, PK Thunder 2, back throw, up aerial, back aerial, and down aerial.

He has a great air game with fast and powerful aerials combined with his ability to double jump cancel which gives him a great flexibility in the air that most other characters do not posses.

He has a good grab and throw game, despite possessing the sixth shortest grab in the current demo. He can chain grab certain characters with his down throw or use it to start combos. His back throw is one of the strongest throws in the game, that can KO opponents at around 100%. His up throw sets up for good air combos.

He has a good projectile in his PK Fire which can help him rack up damage by trapping the opponent while also being useful for edge guarding and can create shield pressure. He also has multiple different options to deal with other projectiles. He has the ability to absorb energy-based projectiles with PSI Magnet, healing himself in the process, and can reflect most of them with his forward smash.

However, Ness's major flaw is his poor range which leaves him vulnerable to characters with disjointed hitboxes (ex. Marth and Meta Knight). Another disadvantage of his poor range is that most of his finishers requires Ness to be close to his opponent while his only finisher with reach, his forward smash, is slow and predictable.

Ness's second major flaw is his recovery, which will leave Ness as a sitting duck until he sets up the PK Thunder 2. During this time, his opponent can get easy hits, cancel out the thunder (thus gimping his recovery), or even hit Ness into his own thunder, causing him to rocket off at a bad angle and die.

Ness has average weight, but below average accelerated falling speed, which allows him to be KO'd vertically early.

Ness also has problems dealing with projectiles that he is unable to absorb, which makes him struggle against characters like Link and Mega Man.

Ness has received a string of buffs. His KO options and recovery are overall better. However, Ness appears to not be more effective than he was last demo.

Ness was seen as a bottom-low tier character when he was first introduced in demo v0.7. In the tier lists for demos v0.7; Ness was ranked 14th of D tier on the first list and 13th of E tier on the second list. In demo v0.8b; like Wario, Ness had a huge tier leap with ranking 2nd of S tier. In demo v0.9a; Ness had a huge tier drop(the biggest drop between demos v0.8b and v0.9a) by ranking 22nd of what can considered C tier where he is now viewed as a low tier character. In demo v0.9b, Ness rose up one position where he is currently ranked 21st of B tier and is seen as a middle tier character. However, the changes in the metagame led to Ness's drop to 24th place of C+ on the second tier list for demo v0.9b. Ness's placement in the current Beta tier list is 25 of B-. 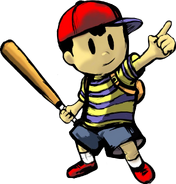 Ness attacking Sandbag with his up throw on Saturn Valley.

Ness taunting next to Kirby with a Home-Run Bat on Saturn Valley.

Ness performing his forward smash at Pikachu on Saturn Valley.

Ness hitting another Ness with his forward smash on Dracula's Castle. 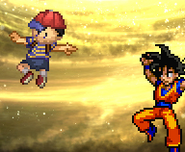 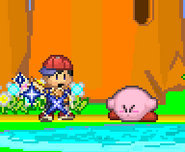 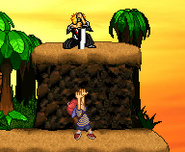 Ness using his up tilt while Ichigo performs his down smash on Jungle Hijinx.

Ness using his up smash on Emerald Cave.

Ness performing his forward smash on Bomberman on WarioWare, Inc..

Ness taunting on a platform on Mushroom Kingdom III.

Ness' second early design, used in the development of Beta 1.2, but never released to the public.