McLeodGaming Wiki
Register
Don't have an account?
Sign In
Advertisement
in: Articles in need of images, Stages, Stages in Super Smash Flash 2,
and 4 more

Mushroom Kingdom III is a starter stage in Super Smash Flash 2 based on the overworld levels of Super Mario Bros. 3. It was originally introduced in demo v0.8a as a replacement for Mushroom Kingdom II, before it returned in the Beta version.

The stage features a large gap in the middle, with solid terrain only being located at the edges of it. Above this gap, many blocks appear. Those blocks can be broken by jumping into them or attacking them. Occasionally, a P-Switch will appear at the edges of the stage. If pressed by any player, it will destroy all the remaining blocks at once, effectively reducing the area of the stage. All blocks will reappear given a certain time after destroyed. The stage also has a platform which moves back and forth once a character stands on it.

This stage is banned in competitive play. The stage has walk-off edges, a central pit dividing the main platform, and blocks that can create caves of life when spawned. This leads to a stage where players can get ridiculously early horizontal KOs, survive for long amounts of time in the center, and camp as much as they please. Overall, a terrible stage for competition.

Breakable blocks have been a mainstay in the saga since Super Mario Bros., and they are heavily featured in classic Mario stages in other Super Smash Bros. games. P-Switches were also introduced in Super Mario Bros. 3, allowing a player to morph all blocks into coins (and vice versa). In Mushroom Kingdom III, a P-Switch spawns, allowing players to destroy all remaining blocks at once, but without leaving any coins. 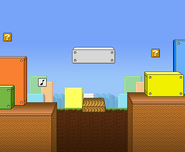 Kirby using his back aerial to break a block.

Link crouching on the moving platform.

Kirby falling next to a P-Switch.

All the stage's blocks breaking as a result of Kirby attacking the P-Switch with his forward smash.