McLeodGaming Wiki
Register
Don't have an account?
Sign In
Advertisement
in: Articles in need of images, Characters, Yeah Jam Fury: U, Me, Everybody!,
and 4 more

Mr. Snowman is an antagonist character from the game Yeah Jam Fury: U, Me, Everybody!.

Mr. Snowman is a giant snowman monster comprised of six segments of snow: a head, a massive chest, three small segments for the torso, and a large bottom segment. The latter five segments each have a single stone on the front, and his head has two stones for eyes, two eyebrows of snow, and a massive mouth with large teeth and an icy jaw. The torso has several wooden branches on each side that are used as arms. He is cold-blooded and destructive, though he also is under the command of Ms. Carrot.

Mr. Snowman appears in Yeah Jam Fury: U, Me, Everybody! in the level Happy Birthday, where he rises from below when Ms. Carrot jumps onto him. He chases the player through the level, destroying any blocks in his path with his body as he advances. He can use his arms to shoot twigs that destroy singular blocks and knock the player back. He can also swing an arm forward to destroy a massive selection of blocks at once and launch the player farther. He disappears halfway into the level, only to reappear and continue chasing the player upwards. 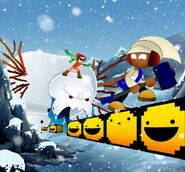