Mr. Saturn (どせいさん) is a recurring species from the EarthBound series that serves as both a background character and a throwing item in Super Smash Flash 2.

Mr. Saturns are a strange race of innocent creatures who reside in Saturn Valley, a village found in both EarthBound's Eagleland and Mother 3's Nowhere Islands. They are known for their characteristic way of dialect, based on series' creator Shigesato Itoi's young daughter's calligraphy at the time, noted by ending many of their sentences with either "Zoom", "Boing", "Ding", or "Dakota". Despite their lack of arms, they are also shown to have mechanical skills by working with Dr. Andonuts to design the Phase Distorter and the Absolutely Safe Capsule.

Eighteen Mr. Saturns appear as background characters on Saturn Valley in Super Smash Flash 2. Of them, several watch the fighters, one of which sits next to a cup of coffee atop the tree stump near the center of the stage. One bathes in the hot spring, and five are stacked on top of each other, referencing the ladder they form in Mother 3. There is also a Mr. Saturn near the right house holding a camera, referred to by developers as "Frank the Saturn" and "Frank the photo-Saturn". There is a Mr. Saturn peeking out from behind the right side of the right house, and another Mr. Saturn is leaning on the ledge next to the right tree. A Mr. Saturn hides in a trash can on the left side of the stage, which will pop out and look around before hiding again (it looks at the screen when it pops out and just before it hides). One Mr. Saturn is stuck in the left tree, flailing its feet while flipped over on its head, and another Mr. Saturn simply stares at the left tree's right side. Lastly, a Mr. Saturn walks up and down the hill on the left side of the stage, it looks left and right before climbing or descending the hill.

Mr. Saturn also appears as a throwing item. Upon landing, it stands up and looks back and forth before starting to walk slowly across the stage. It occasionally stops to look around again and turns around at ledges, and it also falls over occasionally, referencing a certain Mr. Saturn found in Mother 3. When thrown, it deals 4% damage and weak knockback to opponents hit, as well as bouncing off of them. It can also be attacked and knocked away, hitting opponents in its path. Despite its weak damage and knockback, Mr. Saturn deals massive shield damage capable of breaking even full shields.

Mr. Saturn next to Ness on Saturn Valley.

Bomberman throwing a Mr. Saturn at Waluigi on Fourside.

Bandana Dee throwing a Mr. Saturn at Luffy while shielding on Smashville. 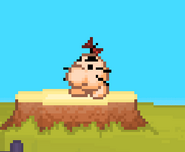 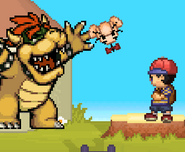 Bowser being hit by Mr. Saturn from Ness. 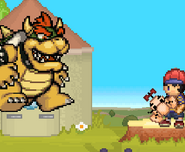 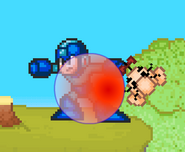 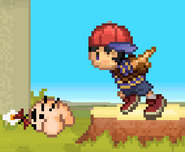 Mr. Saturn on the ground.

A Mr. Saturn turning around.