McLeodGaming Wiki
Register
Don't have an account?
Sign In
Advertisement
in: Attacks, Special moves, Side special moves,
and 4 more

When performed, Isaac shouts "Move!" and summons a giant white Psynergy hand that moves very slowly forward. Opponents it makes contact with are dealt 4% damage with weak knockback that pushes them away. Continuing to hold the special button will keep the hand moving. By pressing the up input while using Move, the hand will fling opponents up from underneath, dealing 7% damage. Pressing the back input will have the hand coming back toward Isaac before disappearing, dealing 6% damage to opponents hit. Pressing the down input will make the hand become a fist, which will slam downwards until it hits the ground and meteor smash anyone hit by it while dealing 8% damage.

Even when Isaac is knocked down, the Psynergy hand will still keep moving. The hand also is a projectile, and thus, it can be reflected. In addition, Isaac's descent is slowed while using the move which may slightly assist in his horizontal recovery.

Move first appeared in Golden Sun as a basic Mars-element Utility Psynergy skill known at the beginning of the game by several characters, including the main protagonist Isaac. With this skill, the user can move away various objects in front of them, such as standing logs, rocks, and other various things, one space away in one of four cardinal directions. It can be used to solve puzzles, and because many of the puzzles in this game and Golden Sun: Dark Dawn utilize movable objects, it is the most used skill in the Golden Sun series.

While Move is an attack in SSF2, it is a non-offensive skill in the Golden Sun games. Its use is instead inspired by Isaac's appearance as an Assist Trophy in Super Smash Bros. Brawl, where Move is used to push opponents away. Additionally, the downward variant of the move is reminiscent of Pound, another non-offensive Mars-element Utility Psynergy skill that appears in Golden Sun: The Lost Age.

Isaac about to use Move on Venus Lighthouse.

Isaac using the Move up command to lift Sonic.

Isaac using the Move back command to push Captain Falcon.

Isaac using the move down command to slam Mega Man. 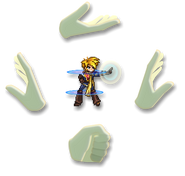 The four directions Move can be used in.